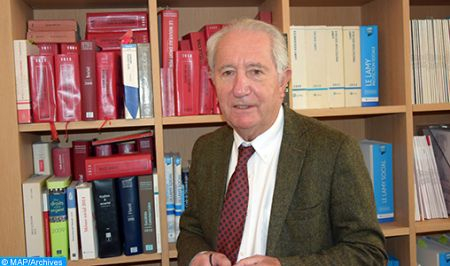 Concerning the Sahara, ”it is time to put an end to illusions inherited from another era”, Lawyer at the Bar of Paris Huber Seillan wrote in an article published in the pan-African magazine ”Jeune Afrique”. In his article, under the title “Moroccan Sahara: the danger of mirages”, President of “France Morocco, Peace and Development” Foundation and member of the International Platform To Defend and Support the Moroccan Sahara, Seillan pointed out at the “falsification” of the facts by the enemies of the territorial integrity of the Kingdom. Faced with “stubborn” and “obstinate” facts proving “links from the early days of Islam” between Morocco and its Sahara, some have a tendency “to substitute illusions that suit them,” the French lawyer and author of the book “The Moroccan Sahara, Space and Time” said. “Algeria has produced, not just created, the polisario and the SADR. A trickery, which dates back more than 45 years ago, to the decolonization act by Spain. It enables Algeria to present itself before the international community as a neutral state, considering only democratic interests of the population and human rights, ” the author wrote. The diplomacy of the Algerian regime is once again based on a “mirage”, he noted, adding that by describing the Polisario and the SADR as exclusive representatives of the people of the Sahara, Algeria declares that it only provides them with political support while they are its “extension”, an “illusion that enables it to systematically combat international efforts tending to a definitive recognition of the status of advanced autonomy of the Sahara under Moroccan sovereignty.” However, today, international public opinion is no longer misled. ”Does a country like Algeria, which massively detains its citizens calling for democracy and human rights, have the legitimacy to speak on behalf of the people of Laayoune, Smara, or Dakhla?” he asked. The French lawyer also warned against risks of an armed conflict that would “disrupt the region and the continent”, noting that ” Daech would benefit from a maneuver in the Sahara and the north of the Sahel countries.” ”Common sense requires everyone to accept facts, enshrined in the international law proving the historical nature of the Moroccan Sahara. A process, desired by the vast majority of countries, particularly African, is now firmly underway: twenty-three consulates general opened in Laayoune and Dakhla,” he wrote. “Adding to this the symbolism of the map of Morocco including the Sahara, which the United States, the world’s leading economic and political power, is now retaining. All this indicate that the result is now very close. This is what the vast majority of French people think, which, no doubt, explains the recent decision of President Macron’s political party to set up a representation in Dakhla,” Seillan noted. “Because mirages last only for a time, the illusion is dead. Reality prevails,” he concluded.