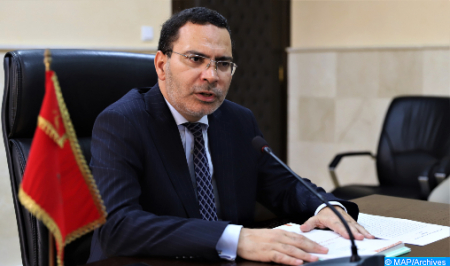 The hosting by Spain of the leader of the “polisario” separatist militias, under a false identity and in coordination with Algeria, is totally contrary to the rules of partnership, friendship and cooperation uniting the two countries, said Mustapha El Khalfi, former minister in charge of relations with the parliament and civil society, government spokesman. This attitude is “contrary to the logic of history and will have consequences on what has been built for years at the level of bilateral relations,” regretted El Khalfi, chairman of the Moroccan Sahara Commission within the Party of Justice and Development (PJD), in a statement to the press, noting that “this comes at a time marked by the violation of the ceasefire by these separatist militias”. “It is still time for Spain to interact positively with the issues raised by our country in order to rectify and turn this page that does not honor its policy advocated in its relations with Morocco,” said the former minister. He recalled the “firm” position of the PJD, which rejected the attitude of Spain and warned against “the seriousness of this unprecedented and intolerable act”.