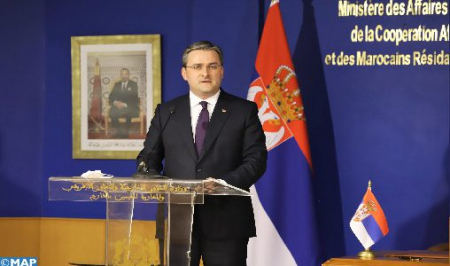 Serbian Foreign Minister, Nicola Selakovic, on Wednesday welcomed the efforts made by the Kingdom of Morocco in order to reach a realistic, practical and enduring political solution to the Sahara issue in a spirit of compromise and realism and in full compliance with UN Security Council resolutions. “The Republic of Serbia considers the Moroccan autonomy initiative, under the Moroccan sovereignty, as a serious and credible solution,” says a joint statement issued following talks between the minister of Foreign Affairs, African Cooperation and Moroccans Abroad, Nasser Bourita, and his Serbian counterpart, Nicola Selakovic, who is on a visit to the Kingdom as part of the celebration of the 64th anniversary of the establishment of diplomatic relations between the Kingdom of Morocco and the Republic of Serbia. Speaking at a press briefing on this occasion, the Serbian top diplomat welcomed the virtuous dynamic characterizing bilateral relations which are based on “understanding, reciprocity and respect for common interests and values”, deeming it as “the precondition for an open dialogue” between the two countries. “Morocco is a friend of the Republic of Serbia”, he pointed out, noting that the quality of the political dialogue between the two countries should be reinforced by “an adequate economic cooperation and a rapprochement between the two peoples.” The Serbian official also welcomed the management by the Kingdom of the Covid-19 pandemic as well as the vaccination campaign, noting that his country is ready to share its experience in this area with Morocco. At the economic level, the Serbian FM noted that the next session of the joint commission for commercial, economic and scientific cooperation, scheduled in Belgrade, on June 23-24, 2021, will be an opportunity to discuss the means to further strengthen economic cooperation. “Serbia and Morocco share important values and interests which must be translated into concrete cooperation,” he stressed. For his part, Mr. Bourita thanked Serbia for “its constant and constructive position on the Moroccan Sahara issue and the territorial integrity of Morocco”. He also welcomed bilateral relations that are “marked by friendship and trust, mutual respect and solidarity” between the two countries, as well as the “total convergence of views with regard to our respective strategic interests”. “If our relations are good at the political, consultation and coordination levels, I think that the economic potential is not yet fully used. This is the roadmap on which we have agreed today to give greater impetus to our economic relations,” Bourita pointed out. And to specify that the joint commission which will be held before the end of the year will have to “focus on these dimensions and will have to broaden its work” within the framework of an economic forum which would allow the two countries to “contribute to the strengthening of this already strong relationship”. The two ministers welcomed the exemplary management by the two countries of the Covid-19 pandemic as well as the vaccination campaign. They highlighted the significant qualitative leap in Morocco-Serbia trade relations despite the pandemic. In order to place the bilateral relations on the path of the strategic partnership, which is sought after by the two countries, the two ministers agreed to strengthen their excellent ties at all levels, in the spirit of friendship, mutual trust and respect of the principal of territorial integrity and national sovereignty, in line with the resolutions of the United Nations Security Council. The two countries signed three partnership agreements in various fields, which will allow the exchange of know-how and experience and the strengthening of bilateral relations. These agreements include a Memorandum of Understanding on political consultations, a Cooperation Program in the fields of Culture, Higher Education, Scientific Research, Communication, Media, Youth and Sports (2021-2024) and a Defense Cooperation Agreement, which will enable the exchange of know-how as well as experience and enhance bilateral relations.