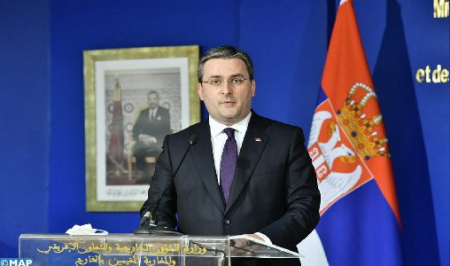 The Moroccan autonomy initiative is a “very serious proposal that must be taken into consideration” to reach a realistic and durable solution to the regional conflict in the Sahara, Serbian Foreign Minister Nicola Selakovic said on Wednesday. “We support the approach adopted by Morocco (the Autonomy plan) to achieve a durable and realistic solution” to the artificial conflict created over the Sahara, underlined Selakovic in an interview with M24, the 24-hour news channel of Moroccan News Agency (MAP). Serbia believes that the diplomatic approach and dialogue remain the best method to resolve sensitive issues, he noted, adding that this is the case of Morocco which has put on the table a “very serious proposal which must be taken into consideration” for the settlement of this regional conflict. Selakovic, who is on a working visit to Morocco as part of the celebration of the 64th anniversary of the establishment of diplomatic relations between the two countries, had expressed his country’s support for the autonomy plan, in a joint statement issued following his talks with Minister of Foreign Affairs, African Cooperation and Moroccans Abroad Nasser Bourita. He notably highlighted the efforts made by the Kingdom with a view to reaching a realistic, pragmatic and durable political solution to the Sahara conflict in a spirit of compromise and realism and in full respect for the resolutions of the UN Security Council. The statement underlined that “the Republic of Serbia considers the Moroccan initiative of autonomy under the sovereignty of Morocco, as a serious and credible solution”.