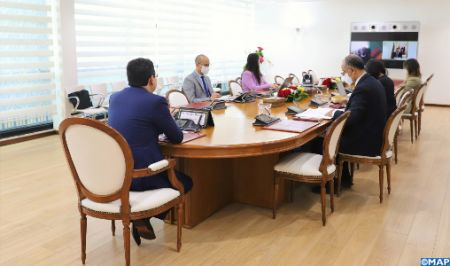 Zambian Foreign Minister, Joseph Malanji, on Thursday reiterated his country’s “unwavering and continued” support to the territorial integrity of the Kingdom of Morocco. The minister lauded, during a videoconference held with his Moroccan counterpart, Nasser Bourita, the efforts undertaken by Morocco to achieve a political solution for the regional dispute over the Moroccan Sahara, says a statement by the ministry of Foreign Affairs, African Cooperation and Moroccans Abroad. The Zambian top diplomat praised the credibility and the primacy of the Moroccan Autonomy Plan as the basis to settle this issue, while reiterating the full support of the Republic of Zambia to the role played by the United Nations as an exclusive and consensual framework to reach a lasting solution to this regional dispute and to the African Union decision 693 adopted by the 31st Summit in July 2018, formally supporting the United Nations process in this regard. This videoconference is part of the efforts aimed at strengthening and consolidating the friendship, brotherhood and cooperation between the two countries, the statement points out. The two ministers welcomed the outcomes of the historic royal visit of HM King Mohammed VI to Zambia in February 2017. This visit translated a strong desire to strengthen bilateral relations and to forge personal ties between the two Heads of State, His Majesty King Mohammed VI and His brother President Edgar Lungu, and ushered in a new era of the Moroccan-Zambian relations, the source underlines. The two officials agreed to intensify political consultations on African and international issues of common interest between their respective Foreign Affairs Departments. They also stressed the need to move towards concrete actions in order to substantiate the relations between both countries, in particular through the identification of new areas of cooperation. At the diplomatic level, the two ministers agreed to instruct their Permanent Representatives in New York, Geneva and the African Union to coordinate their actions and decisions regarding issues of common interest.  Mr. Bourita and Mr. Malanji expressed their willingness to further strengthen the strategic communication and coordination between the two countries during the various multilateral meetings and international forums, such as the African Union (AU) and the United Nations.  The two sides pledged to support each other on issues relating to their core interests, according to the same source.  The two ministers underlined the importance of the Joint Commission for Cooperation (JCC) as a key mechanism to strengthen ongoing collaboration between the two countries and acknowledged the necessity of regular occurrences. They agreed that the 1st Session of the JCC will be hosted as soon as the global health situation improves. Both parties welcomed Zambia’s opening of a resident Embassy in Rabat on 24 October 2020 and a Consulate General in Laayoune on 27 October 2020.  Mr. Bourita assured Mr. Malanji of the intention of the Kingdom of Morocco to put its experience and expertise in the fields of economic and social development towards the benefit of the Republic of Zambia for the achievement of its development plan. The two ministers expressed the wish to develop cooperation between the two countries in several fields, including renewable energies, agriculture, infrastructure, training, water, education and the exchange of experiences in the field of water management and dam construction. The Zambian FM reassured his counterpart of the unwavering support of Zambia to the Moroccan candidacy for the post of AU Commissioner for Education, Science, Technology and Innovation.