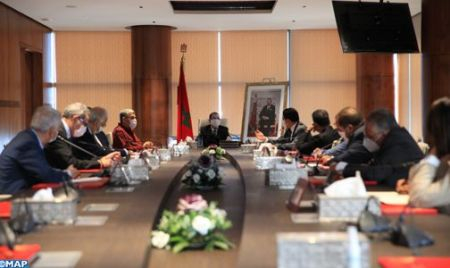 The hosting by Spain of the leader of the ”polisario” separatists, the so-called Brahim Ghali, is an ”unacceptable” and ”condemnable” act and is in flagrant contradiction with the quality of relations between Morocco and Spain, said on Saturday in Rabat, the Moroccan political parties represented in Parliament. This is an “unacceptable and condemnable act and an explicit provocation vis-à-vis Morocco, in flagrant contradiction with the quality of bilateral relations between the two peoples, the two countries and the good neighborliness, especially since this individual is dragging serious accusations of human rights violations, crimes against humanity and serious violations of the rights of the detainees in the camps of Tindouf”, they stressed in a joint statement issued after a meeting with head of government, Saad Eddine El Othmani, in the presence of minister of Foreign Affairs, African Cooperation and Moroccans Abroad, Nasser Bourita. Indicating that they have learned with strong disapproval and indignation the hosting of the leader of the ”polisario” separatist front, under false identity, “which reflects an attitude peculiar to militias and criminal gangs”, the political parties signatories of the statement call on the Spanish government to clearly specify its position on this flagrant violation and to undertake immediately everything that is likely to remedy this situation. They also deplored the “attitude of indulgence and complacency” shown by the Spanish authorities in hosting an enemy of the Kingdom, in flagrant violation of the law and disregarding the vital interests of a neighboring country and partner. In this regard, they rejected the “justifications and pretexts of some Spanish officials”, considering that “the partnership and good neighborliness require respecting the sovereignty of Morocco and stop dealing with its enemies”. These political parties said, moreover, convinced that Spain has “suffered and still suffers from separatism and its negative impact on its stability and unity, but at no time a Moroccan party has taken a position or undertaken an act supporting the separatist thesis in the Spanish neighbor”, reaffirming their deep conviction that the criminal acts committed by the so-called Brahim Ghali imply his prosecution before the Spanish justice system, following the complaints filed against him and to render justice to the victims of his multiple crimes. They called, in this sense, the various forces in Spain to act quickly and to assert the voice of wisdom and logic of the common higher interests between the two countries, in order to immediately correct this serious violation against Morocco and repair the damage suffered by the long-standing relations between the two peoples and the two countries. Reaffirming their constant commitment behind HM King Mohammed VI for the defense of the territorial integrity of the Kingdom which is unanimously national, they reiterated their pride in the important and unprecedented achievements made in favor of the national cause, as well as their constant mobilization to confront acts and attitudes that could undermine the sovereignty of Morocco or threaten its supreme interests. The joint statement is signed by the Party of Justice and Development (PJD), the Authenticity and Modernity Party (PAM), the Istiqlal Party (PI), the National Rally of Independents (RNI), the Popular Movement (MP), the Socialist Union of Popular Forces (USFP), the Constitutional Union (UC), the Party of Progress and Socialism (PPS) and the United Socialist Party (PSU).