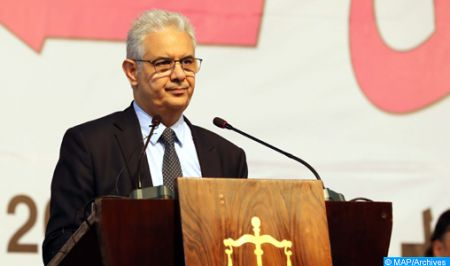 The decision of the Spanish government to host the polisario leader seriously damages the partnership with Morocco, said secretary general of the Istiqlal Party, Nizar Baraka. “We consider, in the Istiqlal Party, that the decision of the Spanish government to host the leader of the polisario, who is subject to several prosecutions in Spain for serious crimes against humanity, torture, rape, terrorism, kidnapping and who, moreover, has declared war on Morocco and refuses to respect the ceasefire agreement of 1991 since November 2020, seriously undermines the serenity of this partnership convergence that our two countries know how to hold in high esteem when necessary,” wrote Baraka in a letter addressed to president of the Spanish Popular Party (PPE), Pablo Casado. “(…) this decision has been experienced by my political family as a stab in the back, so unacceptable, untimely and unfriendly,” he lamented. The incomprehension was strong and general in Morocco, said Baraka, informing the president of the PPE that a strong taste of bitterness spread throughout the nation and that no one could explain or justify how Spain, a neighboring country, partner and friend, could indulge in such an initiative that disregards the very values of the commitments that the countries bear to each other. He also noted the Moroccan feeling towards this “gesture of enmity, not to say hostility and adversity endorsed by Spain”. “Our bilateral relationship is marked by the seal of excellence, which should remind us every day that we have duties, commitments and legitimate rights towards each other,” he insisted, stressing that excellence is not just a word but the expression of tireless efforts and immutable will. “Let’s not lose the essence of what makes our relationship great, let’s make sure to preserve it so that we never turn our backs and always look each other straight in the eye with trust and understanding in the good and in the bad,” stressed Baraka. “In the particular context that our region is going through, we can not afford to mortgage the future of our two countries, linked by centuries of history and common ambitions,” he added. Moreover, Baraka expressed to Casado all his friendship as well as his most sincere congratulations for the approach, the interest and the commitments of the Spanish Popular Party in favor of a bilateral Moroccan-Spanish relationship always more fruitful, constructive and solid in its foundations. “It is without great surprise but always with great satisfaction that I note, once again, that the political family that you lead has been in the forefront to challenge the government of your country, following the hosting on the Spanish soil of the leader of the polisario separatists”, he wrote, noting that the PPE has not only shown a reiterated friendship with Morocco, but also demonstrated a political coherence and fraternal empathy that unfortunately has been drastically lacking in other currents of the Spanish political scene.