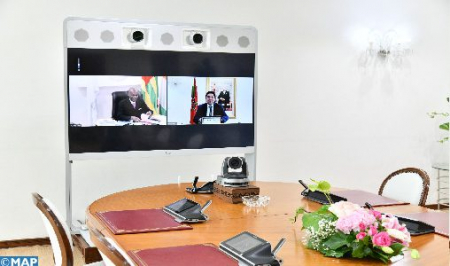 Togolese Minister of Foreign Affairs, African Integration and Togolese Abroad, Robert Dussey reiterated, Monday, his country’s firm and constant attachment to the territorial integrity of Morocco. Speaking during a video conference held with Minister of Foreign Affairs, African Cooperation and Moroccans Abroad, Nasser Bourita, as part of the ties of friendship and brotherhood that unite the Kingdom of Morocco and the Republic of Togo, and in accordance with the willingness of both countries to further strengthen their cooperation relations, Dussey reiterated the firm and constant attachment of his country to the territorial integrity of Morocco, said a statement by the Ministry of Foreign Affairs, African Cooperation and Moroccans Abroad. Dussey also renewed his firm support for a negotiated, consensual and final political solution, under the exclusive auspices of the United Nations, guaranteeing the autonomy project of the southern Moroccan provinces, within the framework of the sovereignty of the Kingdom of Morocco, its national unity and its territorial integrity. On this occasion, Bourita welcomed the participation of Togo, in the person of Robert Dussey, in the Ministerial Conference in Support of the Initiative of Autonomy under the Sovereignty of Morocco, held virtually on January 15, 2021 at the invitation of the Kingdom of Morocco and the United States of America. The Togolese minister stressed that this meeting was very important, marking the fact that the sovereignty of Morocco over the Sahara region is total. The two ministers stressed, moreover, the imperative of respecting the norms and procedures within the bodies of the African Union (AU), reaffirming the relevance of Decision 693 of the AU Heads of State and Government Summit of July 2018, which enshrined the exclusivity of the UN as the framework for the search for a solution to the regional conflict over the Moroccan Sahara. They also welcomed the excellent level of the ties of friendship and solidarity between the two brotherly countries and exalted the quality of the feelings of esteem and respect that characterize the relations between their Heads of State, His Majesty King Mohammed VI and His brother His Excellency Faure Gnassingbé, President of the Republic of Togo, stressed the statement, recalling in this regard their fraternal talks in 2016, on the sidelines of the High-Level Meeting of the COP22 and the African Action Summit. In addition, Dussey welcomed the announcement by Bourita of the upcoming opening of a Moroccan diplomatic mission in Lome, said the statement, noting that the two ministers are committed to making every effort to further strengthen their relations, intensify and diversify their cooperation in all promising sectors, including training. Thus, the quota of educational scholarships granted by Morocco annually to Togolese students has been increased from 70 to 100. They also agreed to further strengthen the ambitious South-South cooperation through a partnership encompassing areas of common interest and based on the exchange of experiences and a more proactive policy of businessmen of both countries. On this subject, the two parties decided to multiply the missions of businessmen to prospect other opportunities of trade and investment and to create a Morocco-Togolese Business Council. Bourita and Dussey agreed to hold in Rabat, once the global health situation allows it, the first session of the Moroccan-Togolese Joint Commission of Cooperation, on a date to be determined by mutual agreement.