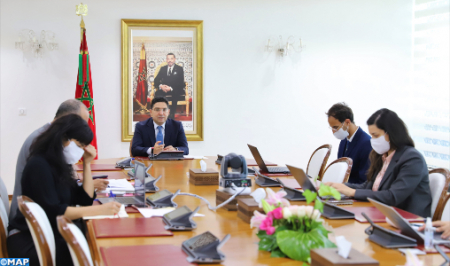 Minister of Foreign Affairs, African Cooperation and Moroccans Abroad, Nasser Bourita, on Tuesday held talks by videoconference with the Minister of State, Minister of Foreign Affairs, African Integration and the Diaspora, Kandia Kamissoko Camara. The two ministers welcomed the relations of friendship and cooperation between Morocco and Côte d’Ivoire, under the leadership of the heads of state of the two countries, HM King Mohammed VI and H.E. Alassane Ouattara, says the ministry of Foreign Affairs in a statement. The two sides, who welcomed bilateral relations, marked by fraternity and solidarity, underlined that these relations cover the areas of education, infrastructure, construction, agribusiness, energy, religion, housing and banking. They also commended the level of execution of bilateral agreements signed during the various visits of the two Heads of State. The two sides reaffirmed, on this occasion, the will of the two Heads of State to strengthen, deepen and broaden bilateral relations. Bourita reiterated Morocco’s thanks to Côte d’Ivoire for its unwavering and strong support for Morocco’s territorial integrity, in particular through its clear positions in favor of the Moroccan Sahara, in regional and international bodies and through its actions on the ground with the opening of a Consulate General in Laayoune in February 2020, as well as the support of Morocco’s action after the securing operation of the crossing border post of El Guerguarate between Morocco and Mauritania, the statement added. Kamissoko Camara reaffirmed on this occasion her country’s strong support for a negotiated, consensual and final political solution to the dispute over the Moroccan Sahara and for compliance with decision 693, adopted at the level of African Heads of State, at the African Union Summit in Nouakchott, in July 2018, which reaffirmed the exclusivity of the United Nations as a framework for the search for a political, mutually acceptable, realistic, pragmatic and lasting solution to the Sahara issue. At the regional level, the two ministers reaffirmed the leadership and commitment of their respective Heads of State in the development of the African continent.

Regarding security issues, Bourita and Kamissoko Camara expressed their deep concern at the rise of extremism and terrorism in Africa, especially in the Sahel and Sahara regions. In this regard, they reaffirmed their commitment to work together to strengthen peace, stability and development in these regions. The ministers committed to better coordination of their actions and to mutual support of Moroccan and Ivorian candidatures within regional and international bodies. In this context, Bourita voiced his thanks to his Ivorian counterpart for the unconditional support of Côte d’Ivoire to the various Moroccan candidatures, in particular for the post of non-permanent member of the United Nations Security Council (2028 -2029), the Human Rights Council (2023-2025), the post of member of the Executive Council of the World Tourism Organization (2022-2025) and the post of President of the International Civil Service Commission (2023-2026). Bourita also welcomed the commitment of Côte d’Ivoire to supporting Morocco’s action within the African Union, the statement concluded.