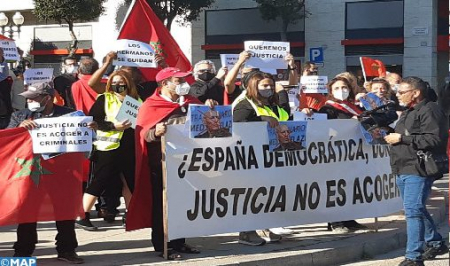 More than 100 organizations and associative actors representing the Moroccan diaspora in Spain have urged the Spanish justice to seize the “historic opportunity” of the illegal presence of the leader of the Polisario militias, the so-called Brahim Ghali, on the Spanish territory to render justice to the victims and end impunity. The so-called Brahim Ghali, accused of serious crimes of genocide, murder, torture and disappearance, has been the subject of an arrest warrant since 2008, and since then, he wasn’t able to access Spain or any other European country, says the representatives of the Moroccan associative fabric in an “Appeal” published Wednesday, denouncing “once again the attempt to enshrine the impunity of the so-called Brahim Ghali.” The leader of the separatists has never been brought to justice for his violent acts committed against Moroccan and Spanish victims despite been summoned in 2016 by the National Audience Court, the highest Spanish criminal court, following a complaint filed by the Sahrawi Association for the Defense of Human Rights (ASADEDH) in 2012, recalls the same source. Thus, the signatories of this Appeal reiterated their “indignation that the leader of the polisario militias is in Spain without being arrested by the Spanish judicial authorities for the serious genocide crimes, murders, torture and enforced disappearance he is accused of.” “Today, the leader of the Polisario separatists is in the  hospital of San Pedro in Logrono under a fake identity, which represents a historic opportunity for justice to be done, and thus, putting an end to impunity and protecting the rights of victims,” said the organizations and associations representing the Moroccan diaspora in Spain. While expressing confidence in the Spanish justice system, the Moroccan associative fabric calls for the reactivation of the judicial process against the so-called Brahim Ghali for crimes against humanity and the necessary measures to ensure that he does not leave the Spanish territory before being brought to trial. “Both the Spanish victims of Polisario terrorism and the Sahrawi dissidents in Tindouf who have suffered torture and rape continue to live in a deplorable situation of abandonment, demanding that justice be finally done and that their despoiled rights be recognized,” the source pointed out.