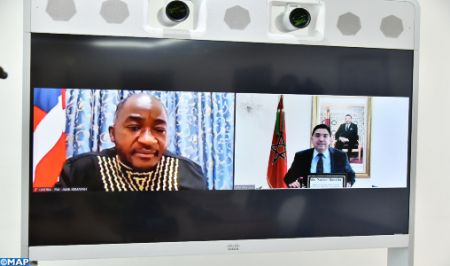 Minister of Foreign Affairs, African Cooperation and Moroccans Abroad, Nasser Bourita, held talks, Wednesday by videoconference, with minister of Foreign Affairs of the Republic of Liberia, Dee-Maxwell Saah Kemayah Sr., as part of the consolidation of Morocco-Liberian relations. The two ministers welcomed the positive developments witnessed in relations between the two brotherly countries in recent years, as evidenced by the holding of the Joint Commission in 2019, the opening of the Liberian consulate in Dakhla in March 2020 and the signing of a series of agreements, said a statement by the Ministry. In this regard, Bourita renewed Morocco’s commitment to support the strengthening and development of human capacity in Liberia through the provision of scholarships and other professional training. Morocco plans to deepen this exceptional relationship as part of the recovery program “Liberia Vision 2030”, added the statement. He also said he had agreed with his Liberian counterpart to further develop bilateral relations, notably through a mission for sectoral cooperation that will travel to Monrovia, as soon as health conditions allow, to prepare the next session of the Joint Commission. In addition, the minister reiterated Morocco’s thanks to Liberia for its constant and firm support to the territorial integrity of Morocco, especially through its clear positions in favor of the Moroccan Sahara, in regional and international forums and through its actions on the ground, concretized by the opening of a Consulate General of Liberia in Dakhla in March 2020, and the support expressed to Morocco’s action after the liberation of the passage at the border post of El Guergarat between Morocco and Mauritania. For his part, Dee-Maxwell Saah Kemayah Sr. renewed his country’s support for a negotiated, consensual and final political solution to the dispute over the Moroccan Sahara, reiterating the need to respect Decision 693, adopted at the level of African Heads of State, at the African Union Summit in Nouakchott, in July 2018, which reaffirmed the exclusivity of the United Nations as the framework for seeking mutually acceptable, realistic, pragmatic and sustainable political solution to the Sahara issue. The two ministers also committed to better coordination of their actions and constant mutual support in regional and international forums, to defend their respective interests and work together for development, peace and stability of the African continent. On this basis, the two parties agreed to support, in a concerted and mutual manner, the Moroccan and Liberian candidacies at the level of regional and international fora and to instruct their Permanent Representatives in New York, Geneva and the African Union to coordinate their actions and decisions on issues of common interest. Dee-Maxwell Saah Kemayah Sr. expressed the full support of Liberia to Morocco’s bid for the post of Commissioner of the African Union Commission in the areas of Education, Science, Technology and Innovation, concluded the statement.