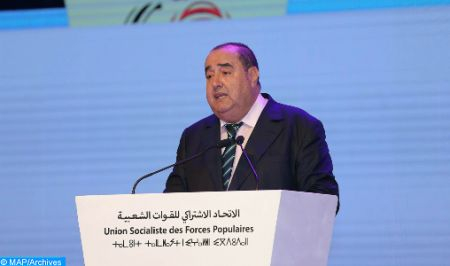 The hosting in secret by Spain of the so-called Brahim Ghali, leader of the polisario separatists under a false identity, is an “outrage” and “a betrayal” undermining the historical relations between the Morocco and Spain, said the First Secretary of the Socialist Union of Popular Forces (USFP) Driss Lachgar, in an interview with the Spanish newspaper ABC, published Wednesday. The attitude of Spain since the outbreak of this case confirms the existence of “an agreement” between the Spanish and Algerian governments to transfer the so-called Brahim Ghali, who is prosecuted for serious allegations of terrorism and genocide, aboard a private plane and with false documents without informing the Moroccan government, said Lachgar. “However, the Spanish government has denied and questioned this situation, which I view as an outrage that undermines the historical relations of good neighborhood, trust, and partnership between our two countries,” he noted. The humanitarian excuse put forward by the government of Pedro Sanchez is not acceptable since the person concerned entered Spain under a false identity, he explained, noting that Moroccan people felt this as “a betrayal from their Spanish neighbors.” Humanitarian considerations have proven to be mere subterfuges, said Laghgar, noting that “the fact of speaking today of historical or administrative responsibility is nothing but nostalgia for a shameful colonial past.” “Any reference to the responsibility or guardianship of Spain on the Saharan provinces is an expression of hostility towards the Moroccan people on a central issue which is today a major turning point in international public opinion following the recognition of the Moroccan Sahara by the United States of America.” He also highlighted the leading role of Morocco in ensuring the Mediterranean is an area of security, peace, and prosperity for the northern and southern shores.  “This crisis prompts us to review in-depth bilateral relations,” he stressed. “Morocco is a victim of this unfriendly act and the Moroccan people expect a clear position from the Spanish government to restore the importance of the strategic partnership between our two countries and reinstate the broken trust,” he concluded.