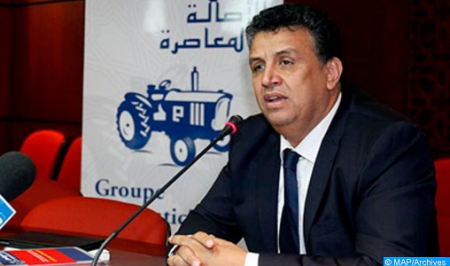 The hosting by Spain of the leader of the “Polisario” militias, the so-called Brahim Ghali, is a “disloyal” act and an “error that must be rectified”, said the secretary general of the Authenticity and Modernity Party (PAM), Abdellatif Ouahbi, in an interview with Spanish newspaper “La Razon”, published on Saturday. “It is a disloyal act, because Morocco continues to consider the Spanish people as a friendly people, a neighbor and a partner. This attitude is categorically rejected”, said Ouahbi, adding that the decision of the government of Pedro Sanchez to host under a fake identity an individual prosecuted by the Spanish courts “hurts good neighbourly relations and friendship between the two peoples”. “Authorizing the entry of a separatist from the Polisario front, accused of having committed serious human rights violations is an unjustified act,” Ouahbi noted, adding that the humanitarian arguments put forward by the Spain to welcome this criminal are not convincing since “thousands of people are living in inhumane conditions in the Tindouf camps”. “I hope that the Spanish government will correct as quickly as possible its error against the Moroccan people, take into account the strategic importance of relations between the two countries and renounce any action undermining the territorial integrity of Morocco,” the politician pointed out, noting that “the Kingdom has never sought escalation with a neighbouring country”. “Morocco favors dialogue with neighbouring countries to build a future marked by peace and cooperation between peoples”, he stressed, adding that “no Moroccan political party has ever supported separatism, including with regard to the conflict between Madrid and Catalonia”. “The Moroccan parliament condemns the actions of the Spanish government, the MPs, both from the majority and the opposition, consider this action as a violation of the principles of good neighbourly relations “, he said, recalling that the political parties representing the Moroccan society reject the position of the Spanish government.