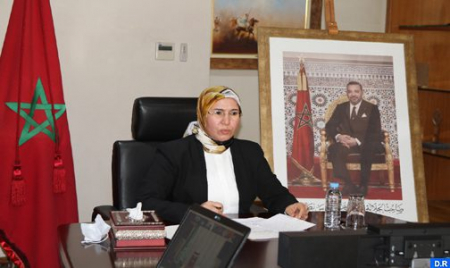 The Kingdom of Morocco on Sunday reaffirmed its unswerving support to the Palestinian people, their legitimate rights, and aspirations for freedom and emancipation, calling for increasing efforts to provide the conditions conducive to the relaunch of the peace process and overcome the current situation which affects security and peace in the region. Speaking at an emergency meeting of the Foreign Ministers of the Organization of Islamic Cooperation, the Moroccan Minister Delegate in charge of Moroccans Abroad, Nezha El Ouafi, said that His Majesty King Mohammed VI, in his capacity as Chairman of Al-Quds Committee, will continue to defend the particular status of Al-Quds, protect its Islamic character, preserve the sanctity of Al-Aqsa Mosque and defend the identity of this holy city as a land of coexistence between the three monotheist religions. She added that the Moroccan approach combines political and diplomatic efforts, at the bilateral level as well as at international fora, in addition to the work on the ground through the Bayt Mal Al-Quds Al-Sharif Agency in order to continuously meet the needs of the inhabitants of the holy city. She pointed out that His Majesty the King gave his high instructions to send emergency humanitarian aid to the Palestinian population in the West Bank and Gaza Strip, in line with the Kingdom’s continued support for the just Palestinian cause and its solidarity with the brotherly Palestinian people. The minister underlined that the escalation needs urgent international efforts to defuse the tension that ultimately only serves the forces of extremism that advocate hate and hostile ideas, noting that the Kingdom of Morocco stresses the importance of continuing international efforts to achieve a fair and just solution of the Palestinian issue, on the basis of the two-state Solution agreed internationally, in a way that allows the establishment of the State of Palestine on the borders of June 4, 1967, with East Jerusalem as its capital. She added that the decision to forcibly displace dozens of Palestinian families from their homes in Sheikh Jarrah neighborhood, the accompanying escalation of Israeli attacks on Al-Aqsa Mosque and the attacks on hundreds of worshipers inside its courtyards, and then the subsequent tension and escalation in the Gaza Strip, are totally unacceptable. She reaffirmed in this regard Morocco’s strong condemnation of the violence committed in the Occupied Palestinian Territories, the continuation of which only widens the gap, reinforces hatred and disrupts the chances of peace in the region. The Kingdom of Morocco remains convinced that the unity of the Islamic and Arab ranks, and adherence to peace as a strategic option and the approach of dialogue and negotiation in regional and international fora, in addition to supporting peace-loving forces in the world, will ensure the success of the Palestinian cause and help establish an independent and fully sovereign Palestinian state, with East-Jerusalem as its capital.