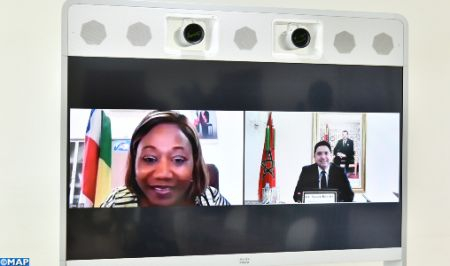 Minister of Foreign Affairs, African Cooperation and Moroccans Abroad, Nasser Bourita, held talks, Friday by videoconference, with Minister of Foreign Affairs and Central Africans Abroad of the Central African Republic (CAR), Sylvie Baïpo-Temon. During this meeting, the two ministers welcomed the privileged nature of Moroccan-Central African solidarity relations based on feelings of esteem and mutual respect between His Majesty King Mohammed VI and His Brother President Faustin-Archange Touadera, said the Ministry of Foreign Affairs, African Cooperation and Moroccans Abroad in a statement. Referring to the current situation in the Central African Republic, Bourita welcomed the efforts made by the Central African authorities and the international community to promote peace, stability and development in this sister country. On this occasion, he congratulated President Touadera for his policy of openness and the spirit of national harmony and inclusiveness with which he conducted the national dialogue, the statement said. Bourita called for support for the sub-regional initiatives of the Central African President and his government and for support for the lifting of the arms embargo. Morocco, said Bourita, and as part of the peacekeeping configuration, stands with the brotherly people of CAR in their determination to rebuild a professional, republican and operational army. The Minister also highlighted the priority and interest of both countries to develop relations of political cooperation, based on respect and defense of the sovereignty and unity of African States. In this regard, Baïpo-Temon reiterated her support for the Moroccan Sahara and efforts to find a lasting solution to this dispute. The two parties agreed to work together for the respect of norms and procedures related to this issue within the bodies of the African Union (AU), while reaffirming the relevance of Decision 693 of the Summit of Heads of State and Government of the African Union in July 2018, which enshrined the exclusivity of the United Nations as the framework for the search for a solution to the regional conflict over the Moroccan Sahara. Bourita and Baïpo-Temon stressed the importance of strengthening their coordination within the various multilateral platforms (AU, UN, etc..), to make more consistent diplomatic actions undertaken at the level of these bodies with the official positions adopted by the two countries on various issues of common interest. In the same spirit, they undertook to support, in a concerted and mutual manner, the Moroccan and Central African candidacies in regional and international organizations. Baïpo-Temon reiterated her support and solidarity to the Kingdom of Morocco, especially regarding the various candidacies underway for the position of Commissioner of the AU Commission in the areas of education, science, technology and innovation and for the post of Chairperson of the International Civil Service Commission (2023-2026). The two officials agreed to schedule the 4th session of the Morocco-CAR cooperation Joint Commission in the last quarter of 2021, stressing the important role played by the private sector in the promotion of these relations as well as in strengthening economic and trade between the two countries.