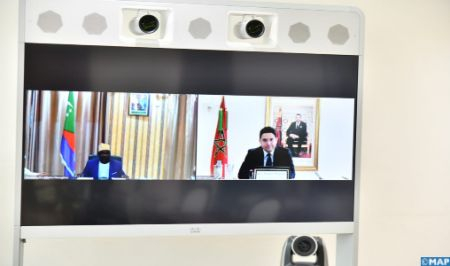 Minister of Foreign Affairs, African Cooperation and Moroccans Abroad, Nasser Bourita, held talks, Friday by videoconference, with Minister of Foreign Affairs and International Cooperation of the Union of Comoros, in charge of the Diaspora, Dhoihir Dkhoulkamal, as part of strengthening relations of friendship, collaboration and solidarity between the Kingdom of Morocco and the Union of Comoros, in accordance with the will of both countries to further consolidate their cooperation ties. The two ministers welcomed the excellent ties of friendship and solidarity between the two countries and praised the quality of feelings of esteem and respect that characterize the relationship between His Majesty King Mohammed VI and President Azali Assoumani, said a statement by the Ministry. Bourita and Dkhoulkamal reviewed the progress made in the collaboration between the two countries in priority areas such as higher education, economy, trade, health, education, Islamic affairs, vocational training and culture, and were committed to opening new opportunities in these areas through a solidarity-based and active South-South cooperation, noted the statement. Bourita, added the ministry, praised the remarkable developments witnessed by the Union of Comoros under the leadership of President Assoumani, while reiterating the readiness of Morocco to support the Comorian party in the context of achieving the goal of the Comorian government to make the Union of Comoros an emerging country by 2030. The two officials took note of the proceedings of the preparatory meeting of experts, held in Moroni in February 2020, and decided to hold soon, before the end of 2021, the first session of the Great Moroccan-Comorian Joint Commission of Cooperation, added the same source, noting that they have conducted an in-depth exchange of views on issues of common interest at the regional and international levels and welcomed their similar positions on major regional concerns such as development, peace and security in Africa and elsewhere. Bourita praised the important role played by the Union of Comoros in the framework of the Economic Community of Southern African States (SADC), the Common Market for Eastern and Southern Africa (COMESA) and the Indian Ocean Commission (IOC) and its commitment to peace and stability in the sub-region and in Africa. In this regard, Dhoulkamal reaffirmed the constant and unconditional support of the Union of Comoros to His Majesty the King (…) for the territorial integrity of the Kingdom and reiterated its support for the Autonomy Plan for the Moroccan Sahara as the only solution to this regional dispute, specifying the primacy of the role played by the United Nations as an exclusive and consensual framework to achieve a realistic, pragmatic and sustainable political solution, which is based on compromise, stressed the statement. He also stressed the imperative of respecting the norms and procedures of the African Union, and reaffirmed the relevance of Decision 693 of the Summit of Heads of State and Government of the African Union of July 2018, enshrining the exclusivity of the role of the United Nations in the resolution of this artificial dispute. In addition, the Comorian minister stressed the support of the Union of Comoros to the candidacy of Morocco for the post of Commissioner of the African Union for Education, Science, Technology and Innovation and to the other candidacies of the Kingdom, notably for the post of non-permanent member of the UN Security Council as well as the UN Human Rights Council.