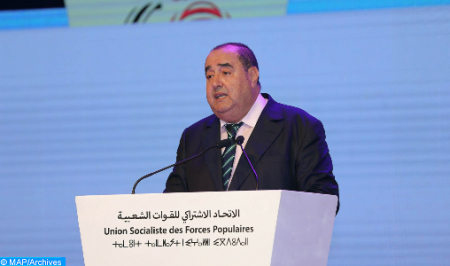 The Socialist Union of Popular Forces (USFP) has called on the Spanish government to “stop insulting Morocco” and to start addressing the policy of friendship and good neighbourliness in the framework of clarity and political and moral responsibility in the service of peace, security and cooperation in the region. “I am writing to you today at a time when relations between our two countries are at their worst following the Spanish government’s recourse to the greatest possible escalation”, deplores the First Secretary of the USFP, Driss Lachguar, in a letter sent to the president of the Spanish Socialist Workers’ Party (PSOE), Pedro Sanchez, noting “with great bitterness, the inhuman behavior of the occupying forces against migrants, in flagrant violation of human rights and Spanish state obligations at the European level concerning the immigration issue”. Lachguar highlighted the huge efforts made by Morocco on the legal, security and economic levels to ensure sub-Saharan migrants a dignified and peaceful life in Morocco, noting that all these efforts significantly contribute to reducing migratory flows to Europe. Lachguar said he was “shocked by the position taken by the European Commission which affirmed that Sebta and Mellilia are European lands, forgetting that they are geographically in Africa and that they are the vestige of the shameful imperialist and colonial history of many European countries”. The First Secretary of the USFP recalls that “Morocco, like the majority of African countries, has been the victim of European plots which have divided its territory and sought to break up its people with genocidal practices including through the use of toxic gases”. “We think it is time to start discussing calmly and reasonably the future of these two cities, taking into account the interests of the Spanish and Moroccan populations that live there,” he noted. The USFP also condemned a frenzied campaign launched by many Spanish media against Morocco and Moroccans, with racist and blasphemous descriptions that contradict the principles of journalistic ethics, adding that this campaign echoes the positions of the Spanish government in particular on the Moroccan Sahara issue. The conflict over the Moroccan Sahara “is, unfortunately, only an episode of a conspiratorial approach aimed at dividing and encircling Morocco. Something which materialized in the financial and media support for the separatists and the establishment of a Madrid Algiers axis, whose last collusion was the falsification of the identity of your host, the leader of the Polisario Front, Brahim Ghali, who surreptitiously entered Spanish soil in order to defraud the justice of this European country, ignoring the interests and rights of European victims who have lodged a complaint against him,” he pointed out. According to Lachguar, the decision of the Spanish government, in agreement with the Algerian government, to transfer the leader of the Polisario by private plane and facilitate his entry into Spanish territory with fake documents, without informing the Moroccan government, constitutes an infringement of good neighbourly relations, trust and partnership linking the two countries. Referring to the “purely humanitarian reasons” which were put forward by the Spanish government to welcome Brahim Ghali on its territory, the First Secretary of the USFP considers that “this cannot justify the method used to welcome the Polisario leader under a fake identity”.

The whole world is witness to the quality of life, prosperity, peace and freedom enjoyed by the Sahrawi populations in Morocco, like their compatriots from other regions of the Kingdom, who seek the consolidation of the democratic process and to the sustainability of development efforts, Lachguer he stressed.

Morocco and Spain are going through one of the most serious crises in their bilateral relations, he said, adding that the USFP “calls you and the Spanish government to stop insulting Morocco and to start approaching the policy of friendship and good neighbourliness within the framework of clarity and political and moral responsibility in the service of peace, security and cooperation in the region”. “I hope that our efforts to make triumph the voices which advocate mutual respect and the strengthening of partnership relations will be received favorably”, he concluded.