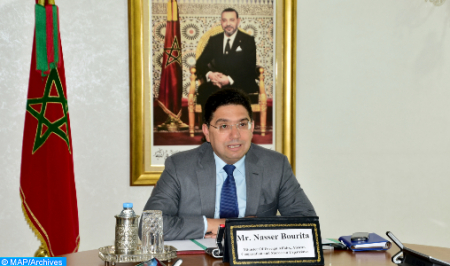 Morocco has no problem with the European Union. He has a problem with Spain on an issue related to its supreme interests and it is up to this country to find the solution, said minister of Foreign Affairs, African Cooperation and Moroccans Abroad, Nasser Bourita. “For Morocco, Spain has created a crisis through acts. And Spain has to resolve this crisis through acts too,” Bourita told French broadcaster LCI on Sunday. “There is in this case a lot of confusion and a lot of fallacious speeches. It is first of all a problem between Morocco and Spain. A political problem”, following Madrid’s decision to host the leader of the “Polisario”, the so-called Brahim Ghali, the minister pointed out. “The reality is that Spain brought this person into its territory with fake documents and a usurped identity without even informing Morocco. The reality is that this person is being prosecuted in Spain. There are at least four complaints against him for rape of a Spanish woman, torture and terrorism by a Canarian association of victims of terrorism. So this is a case of rule of law, the application of the Spanish law and the intervention of the Spanish justice,” Bourita added. According to him, “Morocco has been clear from the start: this is an act against its interests, an unfair act that does not even respect the dignity and interests of the Spanish victims.” And, “the humanitarian considerations that are put forward are just a false alibi.” Because “humanitarian considerations do not mean that we maneuver behind the back of the partner. Humanitarian considerations for a neighboring country do not mean that we change passports and bring a person into European space. Humanitarian considerations do not mean forgetting the rights of Spanish victims and deactivating Spanish justice. That is the root of the problem”. Regarding the migration issue, the minister recalled a few facts “far from any emotion and far from any demagoguery”. “First, Morocco has no obligation to protect borders other than its own. Morocco is not intended to be Europe’s gendarme or its concierge. Morocco does so within the framework of a well-understood partnership between Morocco and Spain and between Morocco and Europe “. “Morocco is doing it as a partner. And if the foundations of this partnership are not respected, we must ask Spain, a European country, whether it has consulted Europe before acting against the interests of this partner. Spain must be asked why it acted fraudulently for a war criminal in connection with an important issue for Morocco and the Moroccans”. According to the Foreign Minister, “Spain did not consult Europe to create the crisis. This is a first fact. Morocco has no obligation. Morocco does so as a partner. But the partnership is not a one-way street. The Partnership is not à la carte. If Europe, a partner of Morocco, considers the fight against migration to be its priority, this partner which is Morocco also has its own priorities”. Regarding the wave of immigrants heading to the occupied city of Sebta, the minister stressed that “the migratory crises have been cyclical. What happened this time is that there is a context. Some wanted to oversize all of this to distract from the real problem.” He noted that “the problem is primarily bilateral between Morocco and Spain. The will to involve Europe and to Europeanize the problem through the migration issue is aimed at distracting attention”. “The crisis is bilateral between Morocco and Spain,” he said. And on the migratory issue, “the register of Morocco is well known”. In this context, he put forward four figures: Morocco has aborted 14,000 illegal immigration attempts in three years. Morocco has dismantled more than 8,000 human trafficking networks. Morocco aborted 80 attempted assaults on the city of Sebta. Finally, Morocco exchanged more than 9,000 information on illegal immigration with Spain. According to Bourita, “if Europe has never been concerned about its western flank, it is not because this area is not used by human trafficking mafias, but because a country has mobilized 20,000 of its security forces on a daily basis to protect its coasts”. Once again, “Morocco does not do this out of obligation”, Bourita stressed, noting that “trains that arrive on time are often forgotten for years”. However, Morocco has fulfilled its obligation as a partner and not in exchange for financial compensation. Morocco receives nothing from Europe, he said. On the outcome that could take this affair, the minister said that “Spain is mistaken if it thinks that by dismissing this man (Brahim Ghali), especially with the same procedures, that the problem will be solved”. “On the contrary! It means that Spain made a choice against the interests of Morocco. Spain would have made a choice against its own citizens who were victims of this criminal. Morocco will draw the consequences.” “For Morocco, Spain has created a crisis by acts. And Spain, by acts still has to resolve this crisis”, he said, affirming that “it is up to Spain to find the solution!”. “You cannot plan at night behind your partner’s back and ask him the next day to be loyal to the priorities of Spain and Europe.” And to conclude that “Morocco is satisfied with its relationship with the EU. Morocco has no problem with the EU. Morocco has a problem with Spain and in connection with a particular issue created by Spain without involving Europe. And I think it’s up to Spain to solve this problem and it’s up to Spain to investigate first how this man got in? Why did they changed his passport? Why was his identity changed? And why has justice been deactivated regarding the heinous crimes he has committed?.”