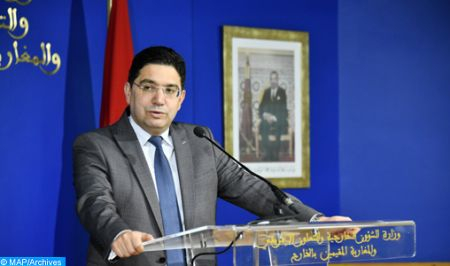 Spain created the crisis with Morocco and made Europe assume it, said Minister of Foreign Affairs, African Cooperation and Moroccans Abroad, Nasser Bourita. “Spain did not consult Europe before taking decisions that affect the interests of Morocco. Spain has not consulted Europe before ignoring the Schengen rules to accept the entry of a person wanted by the Spanish justice (Brahim Ghali, leader of the “polisario”, editor’s note) in a fraudulent manner. Spain has created a crisis and wants Europe to assume it,” said Bourita who was the guest of “Europe Soir weekend” on Europe1. According to the Minister, “we must place the crisis between Morocco and Spain in a context. “A context of bilateral crisis between Morocco and Spain” and “a crisis that has nothing to do with Europe, a crisis that was created by a national decision of Spain without consultation with its European partners”. For Bourita, “there is an attempt to divert the debate, to go to this migration issue while the bottom of the crisis is a disloyal act of Spain to Morocco, to its people and its strategic interests”. On the issue of migration, the Minister recalled some truths and presented some facts “far from any emotional speech”. “The first truth is that Morocco is not obliged, has no vocation or obligation to protect borders other than its own. Morocco is neither the gendarme nor the janitor of Europe to protect borders that are not its own. Morocco does not do this by injunction, nor by obligation. Morocco has done a great deal in migration cooperation, not out of obligation, or in relation to a counterpart. It has done so as part of a partnership. A partnership between Morocco and Spain and a partnership between Morocco and the EU. But the partnership is not à la carte. Partnership means first of all that we understand the strategic interests of the partners”. He stressed that “Morocco has never acted to provide a service in exchange for a salary or financial compensation. What Morocco receives on average from the EU does not exceed 300 million euros per year, or less than 20 percent of the cost assumed by the Kingdom in the fight against illegal immigration”. The crisis with Spain “is primarily a migration crisis born of a political crisis between two partners,” reiterated Bourita, who referred to certain facts and swept away accusations that want to show Morocco as “the villain” in this crisis, in an attempt to divert attention. Over the past four years, Morocco has dismantled 8,000 human trafficking cells. Morocco has also foiled 14,000 illegal immigration attempts, including 80 entry attempts in the city of Ceuta. It has also exchanged more than 9,000 pieces of information on illegal migration with Spain. “Morocco is in a policy of good neighborhood and partnership. “But good neighborliness is not one-way. Good neighborliness is not a responsibility of Morocco and a freedom of its partners to act against its interests,” he added. On the subject of the accusations made against Morocco for resorting to “immigration blackmail” in this conflict with Spain amidst Spain’s hosting of the leader of the “polisario” militia, the Minister said that “here again the problem is badly posed: as if Morocco had an obligation to act to protect Europe. Morocco is not obliged. Morocco does it as a partner and the partnership has foundations. The partnership is reciprocal. It is based on an understanding of each other’s interests”. “You can not scheme at night against your partner, and ask him the next day to be loyal”. Asked about the status of diplomatic relations with Spain, Bourita said that “contrary to what the Spanish Minister (of Foreign Affairs) says, there is no contact between Morocco and Spain since the outbreak of this crisis and contrary to what she says, Morocco has never been informed of the arrival of this individual (Brahim Ghali). “Today Morocco is asking clear questions: is it normal in a state governed by the rule of law to falsify a passport, to usurp an identity in order to let someone enter European territory? Is it normal that this gentleman is prosecuted in Spain in relation to four complaints: a complaint of rape of a Spanish citizen, a complaint of terrorism of an association of victims of Spanish terrorism of the Canary Islands, a complaint of torture … “, wondered Bourita. But, he assured, “Morocco makes the distinction between its very good relations with almost all EU countries, and a bilateral crisis born of a hostile attitude of Spain. “They are trying to divert the debate and create a crisis between Morocco and the EU that does not exist,” said Bourita. On the issue of minor migrants, the Minister said that “this is a problem that Morocco discusses frankly with many European countries as part of its responsibility”. According to Bourita, “there is now a problem of trust, mutual respect with the direct partner in a crisis that Spain itself has created, it is for it to find the solution”. And if “Spain thinks that the crisis could be resolved by exfiltrating this gentleman (Brahim Ghali) by the same procedures is that it seeks the rot and the aggravation of the crisis or even the rupture,” concluded the Minister.