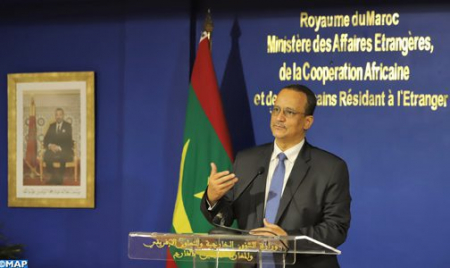 The “solid” relations between Morocco and Mauritania have experienced “a significant leap” in recent years, said, on Monday in Rabat, Minister of Foreign Affairs, Cooperation and Mauritanians Abroad Ismail Ould Sheikh Ahmed, stressing the common ambition to strengthen these relations in terms of trade and in the field of culture. Speaking at a press conference following his talks with Minister of Foreign Affairs, African Cooperation and Moroccans Abroad Nasser Bourita, the Mauritanian diplomat underlined the political will of the leaders of the two countries to give new impetus to bilateral relations. Noting that his talks with Bourita focused on the holding of the High Joint Committee which will be chaired by the Heads of Government of the two countries, Ould Sheikh Ahmed said that it was decided to raise the level of the monitoring committee, chaired until now by the ministers delegate, to that of ministers. He expressed the wish that this committee will be held as soon as possible. After reiterating the great will marking the political relations between Morocco and Mauritania, which manifests itself in particular through the coordination and the shared views, Ould Sheikh Ahmed said that “the economic will is below the ambition of the current policy”. He also underlined that Mauritania constantly praises Morocco’s action in terms of training its executives, in all fields, and receiving every year hundreds of Mauritanian students in Moroccan universities, noting that this initiative dates back to more than three decades.