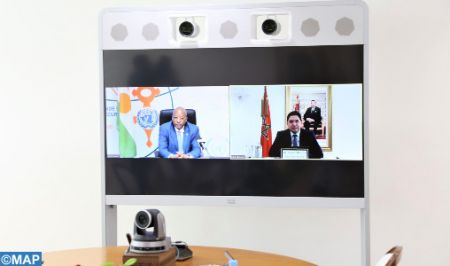 Minister of Foreign Affairs, African Cooperation and Moroccans Abroad, Nasser Bourita, held talks Monday by videoconference with Minister of State, Minister of Foreign Affairs and Cooperation of the Republic of Niger, Hassoumi Massoudou. The two ministers welcomed the solid relations of partnership and cooperation between the two brotherly countries, thanks to the high solicitude of His Majesty King Mohammed VI and His brother President Mohamed Bazoum, and their willingness to continue to develop these ties and raise them to higher levels, said a statement by the ministry. In this regard, the two parties recalled the new momentum in relations between the two countries, following the official visits of His Majesty the King to Niger in 2004 and 2005. Bourita and Massoudou commended the results of the presidential elections held in Niger on April 11, 2021 that took place in a calm and transparent manner and which saw the victory of President Mohamed Bazoum. The Nigerien minister praised the multiform solidarity between the two countries, as advocated by His Majesty King Mohammed VI and His Brother President Mohamed Bazoum. Bourita and Massoudou undertook to coordinate their actions in regional and international forums to promote peace, security and economic development of the African continent and to mutually support the candidacies of Morocco and Niger in these same forums. In this context, the Nigerien minister affirmed the support of Niger to the Moroccan bid for the post of Commissioner of the African Union for Education, Science, Technology and Innovation. In addition, Bourita and Massoudou agreed to promote an ambitious South-South cooperation, through a partnership covering the areas of training, investment, renewable energy, tourism, Islamic affairs, civil protection, airport transport and justice. The two ministers stressed the need to promote the exchange of experiences and to encourage a more proactive economic policy that also mobilizes the private sector. The two parties agreed to hold, in Rabat or Niamey, the next session of the Moroccan-Nigerien Joint Cooperation Commission, once the global health situation allows it, the statement concluded.