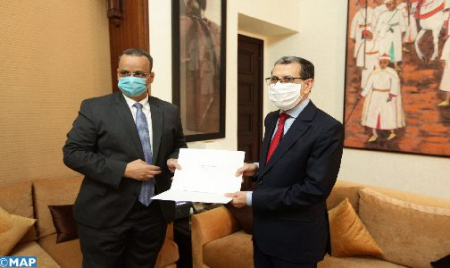 Head of government Saad Dine El Otmani received, Monday in Rabat, the Mauritanian Minister of Foreign Affairs, Ismail Ould Cheikh Ahmed, bearer of a message to His Majesty King Mohammed VI from President Mohammed Ould Cheikh El-Ghazouani. In a statement to the press, El Otmani said that the talks focused on the quality of relations between Morocco and Mauritania and the need for their development and diversification to encompass the economic, scientific, educational and investment fields. El Otmani said that a vision has been developed, according to a timetable and a program established, to strengthen these relations in the future. For his part, Ould Cheikh Ahmed said that Morocco enjoys a privileged place in Mauritania, describing as excellent bilateral relations, which have continued to grow in recent years. In this regard, the Mauritanian official recalled that the telephone conversation between HM the King and the Mauritanian president has given a strong impetus to these relations. He expressed the hope that the High Joint Commission, chaired by the heads of government of both countries, will be held soon to raise bilateral relations to the level of aspirations of both Heads of State. The Mauritanian minister also said that these relations have experienced a strong momentum in recent years in all areas, including economy and culture, through the enrollment of several Mauritanian students in Moroccan universities.