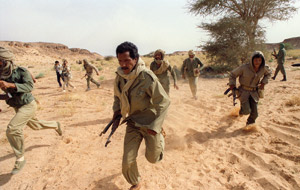 Security in North Africa and at the Sahel depends closely on the control of the clandestine activities which took place in the perimeter of Tindouf. The objective is to abate the links between elements from the Polisario and the terrorist networks of Al Qaida in the Islamic Maghreb (AQMI). Those are the conclusions of the international conference on the political changes and the regional security in North Africa and the Sahel, which took place on May 11, in Tokyo.
Besides, the political changes caused by the dynamic of the on going dispute, many worrying signs push to pull the communication cord about security in the region. The participants to this conference, received by Japan International Foundation, pointed out the fact that terrorism in the region is no more satisfied with the ideological referential. In the Sahel, It relies more and more on the links with the traffic network and organized crimes which prosper in Mali and the North of Niger. Another reason to get worried is the potential transformation of Tindouf camps, which are controlled by the Polisario in the Algerian territory, into another home or haunt for terrorist groups. Such a scenario would carry out the dream so much cherished by Al-Qaida to create an Islamic Emirate in the region. A perspective which is more likely to happen with the existence of a large Sahelo-Saharan zone escaping from any control of the weakened army of the region’s countries.

Concurrently to these destabilizing factors, the conference has mentioned the tense relations between Algeria and Morocco due mainly to the dispute on the Western Sahara. The participants to the conference have also insisted on the uncertain future of Libya and the problematic posed by the struggle for power and the management of the country’s borders. Finally, the possible extension of the AQMI terrorists’ activities towards the North-East of the Sahel after the death of Bin Laden constitutes also a source of anxiety, according to Tokyo conference.