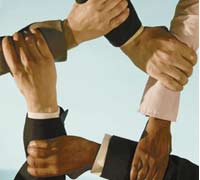 By submitting the autonomy initiative for its Western Provinces, Morocco set a positive, constructive and dynamic process in motion.
The initiative is part of the endeavors made to build a modern, democratic society based on the rule of law, collective and individual freedoms, and economic and social development. It achieves the principle of self-determination through a free, modern and democratic expression regarding the autonomy statute. The initiative guarantees also, compliance with-and promotion of-human rights as they are universally recognized, and as they are enshrined in the Moroccan constitution.
Even if this part of Moroccan territory is enjoying now a high level of development, through the autonomy plan, the Sahara populations will themselves run their affairs democratically, and will have the financial resources needed for the region's development.The area will conceive a specific and coherent action plan, regarding to the specificities and needs of the territory.
The Moroccan people all segments and persuasions included, strongly believe that the autonomy initiative can serve as a basis for dialogue, negotiation, and compromise.

They appreciate all the initiative has to offer in terms of shaping a better future for the region and promoting stability, security and prosperity within.
Morocco has made huge efforts over three decades at the level of human and financial resources to contribute towards the radical transformation of the structure, the look and the development of the Sahara cities.  One of the most important things that the state has made sure to carry out, is to make sure that the whole region is developed up to the standards of the other cities throughout the kingdom, despite the fact that the conditions in the southern provinces require further efforts and sacrifices.
The Moroccan people will shoulder the saharaouis in their efforts to turn this area into a space of peace, stability and prosperity.  The region needs all its resources to achieve development instead of wasting them through sowing divergences.