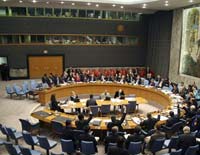 The United Nations Security consil passed a historical resolution monday, welcoming Morocco's efforts to solve the Sahara dispute and qualifying them as "serious and credible". The resolution, for the first time in three years, does not mention the Baker plan, meaning that this is not considered anymore as an option. "Taking note of the Moroccan proposal presented on 11 April 2007 to the Secretary-General and welcoming serious and credible Moroccan efforts to move the process forward towards resolution (…) the Council" reiterated its call "upon the parties and States of the region to continue to cooperate fully with the United Nations and with each other to end the current impasse and to achieve progress towards a political solution."
Morocco had on April 11 presented a draft plan to grant substantial autonomy to its Southern Provinces known as the Sahara. The former Spanish colony was ceded by Spain to Morocco in 1975 under the Madrid Accords. The Polisario, backed by Algeria, claims the independence of the territory.

In its resolution, the Council also calls upon the parties to enter into negotiations "without preconditions in good faith," with a view to achieving a just, lasting and mutually acceptable political solutions. It requests the Secretary-General to "set up these negotiations under his auspices and invites Member States to lend appropriate assistance to such talks".
The Security Council only "takes note" of the Polisario's proposal which calls for self-determination. Indeed, the separatists had in April 10, presented their own proposal which "came as a surprise" as was put recently by the UN Secretary General's Perosnal Envoy, Peter van Walsum. In a statement to MAP bureau in New York in April 20, the Senior UN official made it clear that the Moroccan proposal was the result of an extended political process of national and international consultations, whereas the Polisario separatists’ proposal « came as a surprise at least to me”. “I haven’t been informed it was on the making (…) it is consistent with Polisario well known positions,” he said, stressing that self-determination does not have to mean independence.
The Security Council calls upon “the parties and States of the region to continue to cooperate fully with the United Nations and with each other to end the current impasse and to achieve progress towards a political solution”, reads the resolution in an allusion to Mauritania and Algeria. The latter, despite its political, diplomatic, financial, logistic and military support to the separatists, has always denied any involvement in the dispute. An argument that is not shared by Mr. Walsum who, in the same statement to MAP, insisted that Algeria plays "a preeminent and dominant role" in the Sahara issue.
"Algeria has in this whole dossier (Sahara issue) played an absolutely preeminent, dominant role ever since 1975", he said following a closed hearing of the Council on the Sahara issue.
"I have to say it would be totally dishonest if I didn’t mention that they (Algerians) played an important role" in the conflict, he said, noting that "if there is one thing I've learnt in this one year and a half (as a Personal envoy), it is not to try to formulate exactly the role of Algeria," a country that insists "it is not a part in the conflict".
In its Monday’s resolution, the UN governing body also decided to extend the mandate of the United Nations Mission for the Referendum in Western Sahara until 31 October 2007. Known by its French acronym MINURSO, the blue helmets have been deployed in the Sahara since 1991 to monitor the ceasefire concluded between the two warring parties.