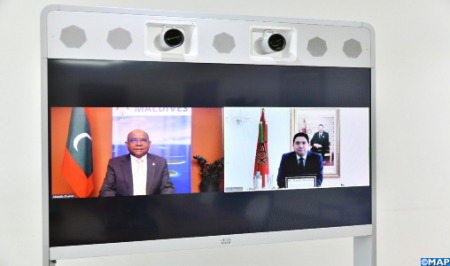 Minister of Foreign Affairs, African Cooperation and Moroccans Abroad Nasser Bourita held on Friday a teleconference meeting with the Minister of Foreign Affairs of the Republic of Maldives Abdulla Shahid. During this meeting, the two ministers hailed the excellent historical and fraternal relations between Morocco and the Maldives and insisted on the importance of promoting them to match the aspirations of HM King Mohammed VI and President of the Republic of Maldives Ibrahim Mohamed Solih, said a statement from the ministry. They also reaffirmed the spiritual, religious, cultural and human ties between the two countries, recalling that Islam was introduced to the Maldives in the 12th century through a Moroccan traveler and preacher. Bourita and Shahid expressed their satisfaction with the positive results of the official visit by the Maldivian minister to Morocco in November 2019, which was crowned by the signing of four bilateral agreements, relating to political consultations, religious cooperation, visa exemption and cooperation between the diplomatic academies of the two countries. The two parties agreed to develop post-Covid bilateral cooperation, by expanding it to other areas notably the fight against terrorism, agriculture, fisheries, tourism, health, culture and renewable energy, according to the same source. In addition, Shahid reiterated the support of the Maldives for the Moroccan initiative for the negotiation of an autonomy status, as being the only just, pragmatic and realistic solution to the issue of the Moroccan Sahara, stressing that his country will always stand by the side of Morocco in its efforts to resolve this regional dispute. The two ministers called for joint efforts to ensure equitable access to vaccines, within the framework of the “Political Declaration on Equitable Global Access to COVID-19 Vaccines”. At the multilateral level, Bourita and Shahid welcomed the fruitful consultation and mutual support for the candidacies of the two countries, as well as the excellent coordination at the level of international bodies and organizations, the statement added. Bourita expressed the support of the Kingdom of Morocco for the candidacy of the Maldivian minister for the Presidency of the 76th United Nations General Assembly. After the meeting, Shahid renewed the invitation to Bourita to pay an official visit to the Maldives, the statement concluded.