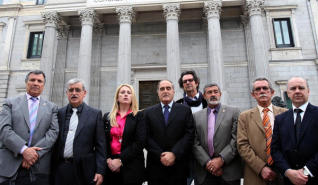 The Canarian Association of Victims of Terrorism (Acavite) has held a meeting with the Spanish Prime Minister, José Luis Zapatero, and the members of the Congress, on the occasion of the victims of terrorism day, in the presence of other associations of victims of terrorism in Spain as well.
Lucia Jimenez, the President of Acavite has underlined that the association has finally succeeded to attract the attention of more than a hundred of recognized victims. The latter have paid the price of “terrible attacks led by the Polisario Front against the military and the Spanish civil people working in the old INI de “FosBucraa” business. The same destiny was undergone by the “Canarian fishermen who were fishing during the years seventy and eighty in the water of the former territory of the Spanish Sahara”. Lucia Jimenez has confided that the Canarian families affected are satisfied of the judicial and administrative recognition of victims, whether by the national court or by the Ministry of interior and the Congress members. This recognition puts an end to “the neglect and forgetting of these victims by the politicians and Spanish institutions, mainly in the Canary Islands”.

According to the president of the Association, certain institutions and Canarian political parties “have never received one euro as grants or whatever aid from the Government, municipality councils or Parliament of the Canariy Islands”. After the adoption of the draft law on the victims of terrorism  by the House of representatives, Lucia Jiménez has called all the Canarian political parties to break free from “the unforgivable and irresponsible policy of double language, denial and ostracism towards the victims of the Polisario terrorism in the Canaries”. Lucia Jiménez whose own father was seriously injured  in an attack perpetrated by the Polisario in 1976 against the mining complex of Fosbucraa, has never ceased to denounce the pro-Polisario propaganda carried by certain political parties in Spain. “A propaganda which does not reflect the reality”, she states furiously.
The ACAVITE was created in 2006 to claim justice and obtain reparation in favour of families of Spanish victims killed in the 70s and 80s in the attacks perpetrated by the Polisario.