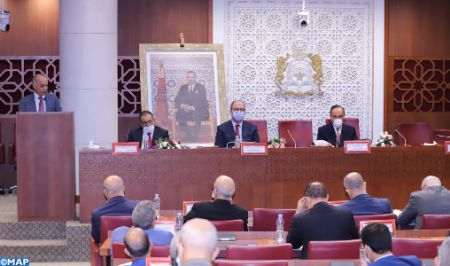 The president of the ad-hoc Committee on the Moroccan Development Model (CSMD) Chakib Benmoussa presented, Tuesday at the Parliament, the broad lines of the general report on the new development model (NMD). During this session, chaired by the speakers of the House of Representatives and Advisors Habib El Malki and Hakim Benchamach respectively, in the presence of the bodies of the two houses, Benmoussa indicated that this meeting takes place pursuant to the instructions of HM King Mohammed VI concerning the launch of the process of presenting the general report on the new model development to all political, economic, trade union and civil society actors. Working on the elaboration of a new development model is a springboard for the advancement of the societal project, under the leadership of His Majesty the King, just as it is an essential cornerstone for the consolidation of the values ​​of responsible and effective citizenship, the strengthening of the sense of belonging to the nation, the promotion of the historical and cultural Moroccan identity rooted and rich in its plurality and the enhancement of the values ​​of openness, dialogue and moderation which characterize Morocco, he said. Benmoussa further noted that the approach adopted by the Committee for the development of this model is based on the contributions of all parties through consultations and several interactive mechanisms such as listening sessions, consultations, field visits and discussion sessions with experts, including Parliament’s contribution through key documents, stressing that the committee has tried to come up with a bold and objective diagnosis that expresses the expectations of all parties concerned. He added that the visions of citizens, political parties, professional organizations, social partners and institutional actors converge towards the recognition of the multiple achievements and capacities of the country while their expectations are mainly linked to social progress, to the access to economic opportunities and to a “crisis of confidence” in certain institutions and among members of society. These common expectations aim to establish effective public services capable of ensuring equal opportunities and the strengthening of individual capacities, of promoting a more inclusive national economy that creates economic opportunities and quality jobs in line with the economic and social reality of  territories, to strengthen the rule of law and the efficiency of public action and to improve the morals of public life, he said. Benmoussa also noted that the report proposes common practical principles based on an approach built on results and the effects on the life of the citizen through the promotion of a culture of performance and results, and on a coordinated and participatory approach through mobilizing collective intelligence in order to increase the capacity to implement public policies effectively. These principles, he went on to say, also concern capacity building through the empowerment and mobilization of energies in order to achieve development objectives, and to strengthen subsidiarity through a proximity policy to ensure efficiency and flexibility within the territories, in addition to sustainability and efficiency through the systematic inclusion of environmental balances and the sustainability of financial resources as criteria framing public action. To ensure an optimal implementation of this project and a permanent commitment, the report proposes two mechanisms to activate this model, notably a National Development Pact which constitutes a moral and political commitment before His Majesty the King and the entire nation, said Benmoussa, adding that this pact will pave the way for a new historic stage on the path of the country’s development in terms of its symbolism, its strategic dimension and its functional nature. The second mechanism recommended by the Ad-hoc Commission is the creation of a mechanism under the direct authority of His Majesty the King to follow the new development model, spur strategic projects and support the will for change.