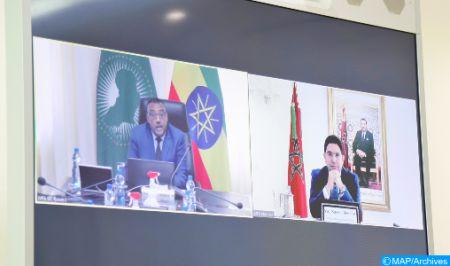 The Ethiopian Ministry of Foreign Affairs lauded the outcome of the talks, which took place by video conference, between Minister of Foreign Affairs, African Cooperation and Moroccans Abroad, Nasser Bourita and the Ethiopian Deputy Prime Minister, Minister of Foreign Affairs, Demeke Mekonnen Hassen. Referring to the relations between Morocco and Ethiopia during a press briefing, the spokesperson of the ministry, Dina Mufti, said that Bourita reiterated the determination of Morocco to strengthen cooperation with Ethiopia in various fields. The two parties also agreed to accelerate the implementation of agreements signed between the two countries in various fields, including those signed during the visit of His Majesty King Mohammed VI in 2016 in Ethiopia, he added. During the talks between the two ministers, Ethiopia praised the serious and credible efforts made by Morocco to find a just, lasting and mutually acceptable political solution to the regional dispute over the Sahara, under the exclusive auspices of the UN and in accordance with the principles and objectives set out in the UN Charter. The two officials also reviewed the progress made in the implementation of the broad and ambitious cooperation agreements between the two countries, said a statement by the Ministry of Foreign Affairs, African Cooperation and Moroccans Abroad. To this end, said the same source, Bourita and Mekonnen Hassen noted with satisfaction the upward development of bilateral ties, particularly since the visit of HM King Mohammed VI to Addis Ababa in 2016, and agreed to maintain this momentum in priority areas, such as education, vocational training, infrastructure, agriculture, renewable energy and decentralized cooperation.