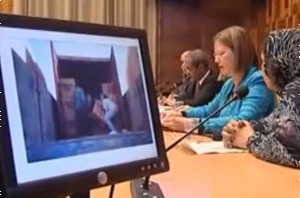 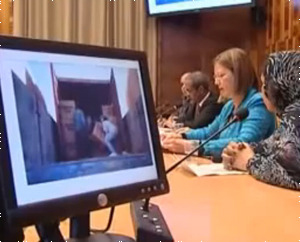 Many  international Organizations state to be detaining some indisputable proofs about  some Algerian executives and Polisario leader’ misappropriation of humanitarian aids intended for refugees in Tindouf camps. A member of the American NGO “Teach the Children International” based in Oklahoma, specifies that the aids of this NGO “have never reached their destination. Full containers have been taken away”.
“We have acquired the proof of these misappropriations and we have been obliged to adjourn then to stop definitely these aids, unfortunately necessary for these populations in (Tindouf camps) which have too much lasted, since 35 years”, has deplored Me. Leah Farish, lawyer specialized in public liberties.
« We are not the first NGO to have revealed these sordid acts, many independent NGOs’ reports have made the bitter statement of these conditions before us”, has she declared to New York press. On his side, the President of the European Strategic Intelligence and Security Center (ESISC), Claude Moniquet, has himself also declared to the press that these misappropriations are “the joint work of the Polisario leadership and certain Algerian milieu close to the authority”.

In a confidential report, he reminded, the European Anti-fraud Office (OLAF) “points out the Algerian Red Crescent as being the main beneficiary from these misappropriations, and this from the Oran port”. But behind the Red Crescent, there are those among the military oligarchy and the powerful executives in Algeria who are the ones to be really giving orders behind the scenes in complicity with the Polisario leaders so as to fill their pockets without getting worried. They always manage to share the magot after selling the aids received in the black market in Algeria and in the neighbouring countries such as Mauritania.
OLAF and ESISC being convinced that “the Algerian responsibility is obvious from the legal point of view”, deplore at this level, the existence within the Algerian regime of a “serious dereliction of international obligations”.
In its report, OLAF has even unveiled the nature of mechanisms for misappropriating human aids intended for Sahrawi refugees, which disappear on their way to these camps by magic, between the unloading port of Oran or Algiers, and the final destination which is normally Tindouf camps. More serious again, deplores the ESISC’s President, the Algerian State, not only closes eyes on these misappropriations, but allows itself to deduct, according to some sources in agreement, the customs taxes on the humanitarian aids at their passage in the frontiers.
To remedy to these irregularities, the ESISC President has pleaded for two short term conditions: proceed to the exact census of the Sahrawi populations and to better control the aids. Nevertheless, since the creation of the Polisario, Algeria and the Polisario refuse any census of the populations in Tindouf camps. “If Algeria’s unjustified refusal” to allow such acensus “can be explained easily considering its relationship with Morocco and its need for a political propaganda about the question of the refugees who are on its territory”, explains ESISC, “the Polisario’s refusal is, in itself, motivated mainly by the illegal benefits that the leaders of the Front make thanks to the overestimation of the number of refugees and, consequently, to a more important humanitarian aid”.
The international community is thus in front of a dilemma: continue giving aid knowing that a great part of it is misappropriated or let the Sahrawi refugees face their destiny?