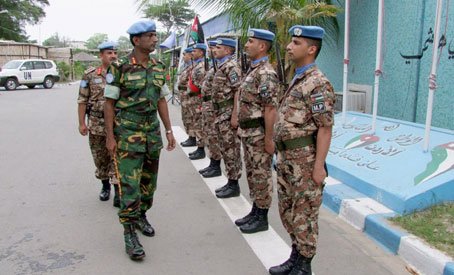 The UN mission forces for the organization of the referendum at the Western Sahara (MINURSO) have since yesterday Wednesday, a new commander. It concerns the Bengali major general, Abdul Hafiz who has just been designed at this post by the UN Secretary General, Ban Ki-Moon. The General Hafiz succeeds to his Chinese predecessor, the major general, Jingmin Zhao, whose mandate has expired on 10th April 2011. “The Secretary General, Ban Ki-Moon, has nominated the brigadier general Abdul Hafiz from Bangladesh to the post of MINURSO commander”, has indicated Martin Nesirky, during a press conference at the UN headquarters in New York. The Secretary General, specifies his spokesman, said to be grateful to General Zhao for his exemplary contribution to the MINURSO activities. Ban Ki-Moon declares to be convinced that “General Hafiz would bring to this new function, his large experience which he has acquired during his distinguished military career, a part of which was devoted to the operations aiming at maintaining peace in the United Nations”.

Before being nominated at the head of the MINURSO forces, General Abdul Hafiz was major general of the Bangladesh army. He was Chief of the connection of the MINUCI military component (UN mission in Ivory Coast) from 2003 to 2004 and Vice Commander of the UN operation in Ivory Coast (ONUCI) between 2004 and 2005. General Hafiz has started his military career in 1977 by integrating Bangladesh infantry as an officer, after some defense studies at the Bangladesh National University. While he was at the head of the UN forces operation in Ivory Coast (ONUCI), Major general Abdul Hafiz has presented his resignation on March 15th, 2011 from this post, specifying not to be willing to get involved with his country’s troops in this ivory conflict. “We are not in Ivory Coast to kill the natives of the country” has he declared, making allusion to a march of some women from the Ivory Coast, which has been violently suppressed fifteen days before by UN soldiers in front of the ONUCI Riviéra camp, a smart district of Abidjan. The Ivory Coast women protest against the involvement of UN soldiers in inter-ivory armed confrontation.