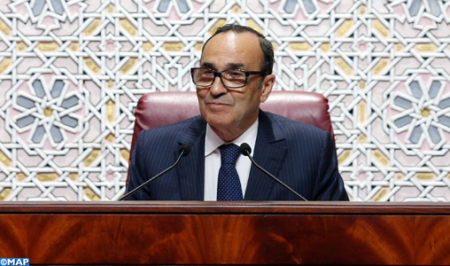 The Spekaer of the House of Representatives (lower house), Habib El Malki, on Sunday expressed his “astonishment” and his “disappointment” following “the inclusion of a draft resolution in the European Parliament on a so-called + use of minors by the Moroccan authorities + in the migratory crisis of Sebta”. El Malki said, in a press release, that this “initiative that is completely out of step with the quality of cooperation between the Moroccan Parliament and the European Parliament”. The move “is part of an attempt to distract attention from a purely bilateral political crisis between Morocco and Spain,” El Malki said. “As everyone knows, this crisis is not linked to migration but to the entry into Spain of an individual prosecuted by Spanish justice for serious crimes against Spanish victims”, he pointed out. “The instrumentalization of the migration issue, and in particular the issue of unaccompanied minors in this context, clearly resembles a maneuver aimed at Europeanizing a bilateral crisis,” he said. “I deplore the exploitation of an exceptional incident within a partnership in which Morocco plays an exemplary role,” said El Malki. “In the migratory area and as affirmed by the Moroccan authorities, Morocco does not act under the orders of the European Union or in exchange for a counterpart. It does so as a partner and within the framework of a shared responsibility, as shown by the figures recorded in the migration and security cooperation over the past few years and which some MEPs seem to ignore,” he underlined. “The House of Representatives, which will follow this issue very closely, hopes that the constructive spirit of partnership will prevail and that the European Parliament will not fall into the trap of escalation”.