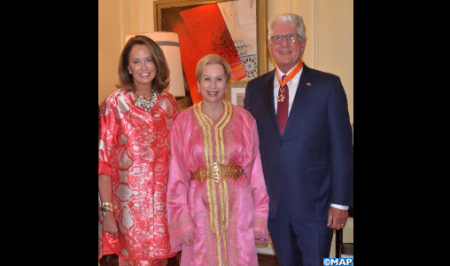 Former U.S. ambassador to Morocco David Fisher on Saturday received in Washington the Alaouite Wissam of the Order of Commander, which was awarded to him by HM King Mohammed VI. The royal decoration was presented to Mr. Fisher by HM the King’s ambassador to the United States, Lalla Joumala Alaoui, during a ceremony held at the Residence of the Moroccan embassy. The Wissam was awarded to the former US ambassador in recognition of his efforts to strengthen bilateral relations and close friendship between the two countries. During this ceremony held in the presence of several personalities, Mr. Fisher expressed his deep gratitude to HM King Mohammed VI, who kindly awarded him this distinction, as well as his pride in receiving this prestigious royal decoration.