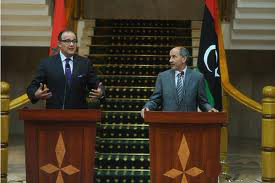 Morocco which, to achieve its integrity, has suffered for a long time from the drifts and gesticulating of the troublemaker Mouammar Kadhafi and his unconditional alliance with the Algerian regime and their protégés of the separatist movement “the Polisario Front”, aspires today to start a new page with the future leaders of Libya of the after-Kadhafi. The declaration of intent in this context, start already appearing on the Maghrebian scene after the collapse of the old regime of Tripoli. Morocco has opened the ball by confirming on last 22nd August, its official recognition of the Libyan Transition National Council (LTNC) as the “unique” and “legitimate” representative of the Libyan people. King Mohammed VI has even decided to put into effect this recognition so as to give it more strength on the diplomatic level, by sending a high level official delegation to Benghazi. In declarations received through phone by Laayoune regional television, the spokesman of the LTNC in London, Jomoa Al-Gamaty, has stated that “the future of the Sahara can be only within the sovereignty of the Kingdom of Morocco”.

The building up of the Grand Maghreb Arab, has he underlined, should exclude any idea of division. Greeting, moreover, the “exemplary and sympathizing” position adopted by Morocco vis-à-vis the Libyan revolution, the Libyan diplomat has criticized the position of Algeria and the support almost clear of its leaders to the regime of Mouammar Kadhafi. He has also deplored the welcoming on the Algerian soil of Mouammar Kadhafi’s family members, qualifying of “inadmissible” the “humanitarian” justifications presented by Algiers’ leaders. On his side, the CNT’s representative in New York, Ibrahim Debbachi, who was number two of the Libyan delegation to the UNO before its defection last March, has expressed his country’s willingness to develop solid relations with Morocco. The latter’s recognition of the CNT, as the unique representative of the Libyan people and the recent visit of Moroccan senior executives to the city of Benghazi, has declared Debbachi to Laayoune regional Tv, constitute “a good indicator that the bilateral relations would evolve in the interest of the two countries”. Libya, has he assured, is determined to build solid relations with all the Arab brother countries. He has, on the opposite, regretted the behavior of the Algerian authorities towards the officers who have deserted and rejoined the Algerian territories before being handed over to Kadhafi’s partisans. On the Moroccan side, the Minister of Foreign Affairs and Cooperation, Taib Fassi Fihri, who participated Thursday to the International Conference in support of the new Libya, held in Paris, has assured that Morocco would not spare any effort to help this country find again its place among the nations. “We support the brother Libyan people on the multilateral level, in particular within the United Nations, so that, has he said, Libya finds once again its place among the nations, through its legitimate representatives, the Transition National Council”. With the erosion of the old Libyan regime of colonel Kadhafi, observers do not exclude a new positive development in the building up of the Maghreb Arab.