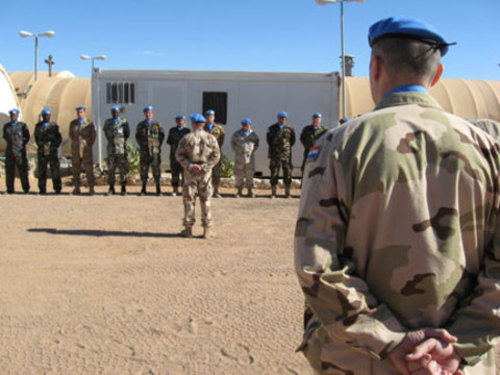 A Polisario armed group has recently attacked some MINURSO elements, the UN mission to the Western Sahara, at the time the latter were doing a reconnaissance to the Bir Lehlu zone, next to Tindouf, at almost 200 km at the South-East of the Smara city. The attack was led by a group of twenty armed persons who have deliberately provoked the UN mission members. The Polisario elements have arrested the MINURSO soldiers and started annoying them by criticizing the “vanity” of their presence in the Sahara. The members of the UN mission have been deprived of their equipment and their material, particularly, of the camera they use in accomplishing their mission fixed by the UN Security Council.
It turned out afterwards that the MINURSO members were taking photos of Sahrawi groups abandoned without assistance, living in difficult humanitarian conditions.

Finally, the members of the UN mission were obliged to withdraw from the region, being, nevertheless,  part of the usual observation zone. The MINURSO chief, the Bangladeshi General Abdul Hafiz, has not appreciated at all this aggression against his troops. Recently nominated to this post by the UN Secretary General Ban Ki-moon, General Abdul Hafiz has ordered to make an investigation about this serious incident. An incident that the Polisario leadership has started to minimize pretending that it concerns an individual act without consequences, before retracting while deciding to remove from office the military chief of the unity responsible of the attack.