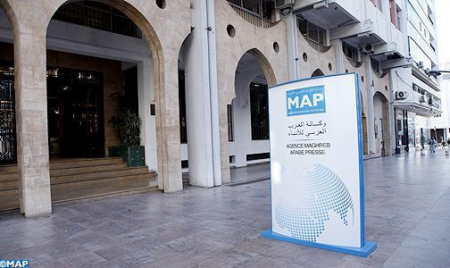 The 2019-2021 report of the Moroccan National Press Trade Union (SNPM) which has just been published is full of untruths, lies and baseless allegations about the Moroccan News Agency (MAP).

Trade union work within the MAP is going in the best possible way. The legally represented trade unions representatives exercise their prerogatives there normally at the Editorial Board and at the Joint Management Committee, two statutory bodies of the Agency, MAP said in a statement.

“The SNPM is not present at MAP because this trade union was unable to elect delegates. Not one. We challenge it to produce some kind of legal receipt of incorporation. The management cannot receive a phantom trade union which does not have a legal and formal existence within it”, the agency added.

MAP also wishes to point out that its social policy is implemented by a Foundation whose transparency, efficiency and quality of services are audited and recognized by all, stressing that the affairs of the social association, of which the SNPM is nostalgic, ended up in trials that led to prison sentences.

Now, if, as in the past, the SNPM does not have access to quotas for hiring and appointing overseas positions, it must be recognized that those days are over. Management acts at MAP are now governed by clear, transparent and documented procedures that leave no room for patronage, the agency pointed out.

The SNPM and its current leaders are men of the past. They transformed this trade union into a personalized annuity and a miserable political office managed in the most complete opacity, according to the same source.

Honest and genuine trade unionists have been marginalized. The current leaders, and at their head Abdellah Bakkali, whom the CEO of the MAP brought to justice for defamation, have led this trade union to its loss.

“We cannot continue to make workers’ unionism obsolete while the sector needs a trade union made up of modern and expert managers, which participates in finding intelligent solutions to get out of the crisis that is hitting the media landscape instead of continuing to consider the press company, public or private, as a sworn enemy,” the agency concluded.