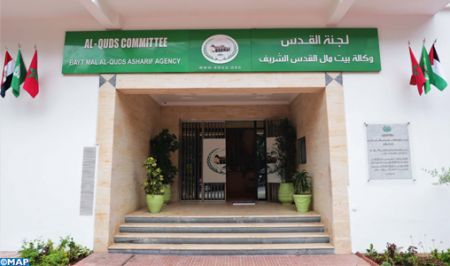 The Bayt Mal Al-Quds Asharif agency expressed, in a report, its concern about the deteriorating social conditions of the inhabitants of the holy city, a situation worsened by the Covid-19 pandemic. Poverty and unemployment have increased in the holy city this year, in a context strongly marked by the repercussions of the coronavirus, the agency lamented in a “surveillance, observation and monitoring report” that it has recently published. The agency under the Al Quds Committee chaired by HM King Mohammed VI, highlighted the impact of incidents in the holy city during the month of Ramadan (May 7-28). It regretted that the factors that caused this situation are still present, citing in particular the arrests among Al Quds youth. The arrests have coincided with the many cases relating to property rights that have been brought before Israeli courts, the agency said, noting that dozens of Arab families are threatened with eviction from their homes. These include the neighborhoods of Sheikh Jerrah, Batn al-Hawa, Solwane and the old city of Al-Quds. Continued security instability is likely to have a negative impact on the socio-economic conditions of the population, the report noted, calling for increased mobilization to support the resistance of Al-Quds inhabitants.