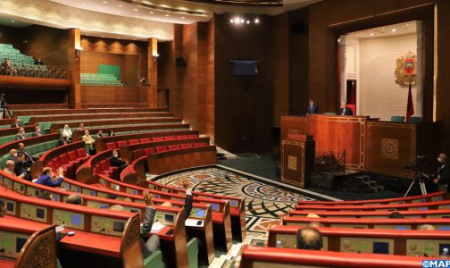 The House of Advisors (upper house) on Tuesday adopted by a majority vote, during a plenary session, the bill n ° 13-21 relating to the legal use of cannabis and incorporated some amendments in the text. The bill, which aims to improve farmers’ revenues and create promising and fixed employment opportunities, was approved by 41 MPs against 11, during a meeting chaired by Abdelhakim Benchamach, Speaker of the House. Presenting this bill, the minister of the Interior, Abdelouafi Laftit, underlined that this text opens up development prospects for the population of the areas affected by the illicit cultivation of cannabis, noting that the international community is now increasingly aware that the repressive approach alone adopted by the global drug control system has limited alternative development programs and has not made it possible to resolve the economic, social and environmental problems encountered by countries that produce this plant, particularly those in the South. He also recalled that the ministry of the Interior has carried out field studies which have demonstrated the catastrophic effects of illicit cultivation of cannabis on the health of citizens and soil pollution due to deforestation and overexploitation of the water table. Referring to the positive impact of the bill on the national economy in general and local development in particular, the minister said that these studies revealed that Morocco has strong potential allowing it to position itself on the world markets of this plant, which are experiencing significant growth rates. In order to attract more investments and international companies specializing in this area, Morocco needs to upgrade its national legal arsenal to regulate and organize the legal use of cannabis, Laftit said, noting that the illegal use of this plant remains prohibited and criminalized by law. He also stressed the urgency of upgrading this legal arsenal, given the unprecedented enthusiasm of countries worldwide to develop the cultivation of cannabis and take advantage of the commercialization of its legal products, adding that any delay in this area would reduce Morocco’s chances of gaining market share at the global level. The minister also said that the bill mainly aims to improve the social level of farmers who find themselves in precarious situation due to the sharp fall in the prices of illicit cannabis and the greed of traffickers, while the legal cultivation could double their revenues and preserve their rights and dignity. The success of this project requires the involvement of the various components of society (Parliament, government, local authorities, civil society, etc.) in order to ensure constructive support for its implementation as well as the sustainable development of the regions concerned, Laftit concluded.