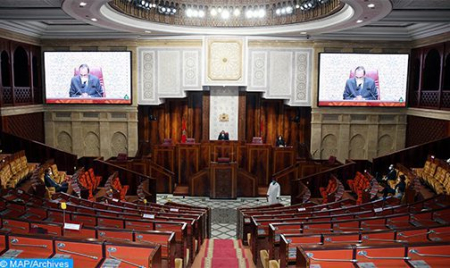 The attempt to export the purely bilateral crisis between Morocco and Spain to the European Parliament is a “maneuver” that will not affect the Kingdom’s determination to defend its positions and its partnership with the European Union (EU), said on Tuesday the representatives of the parliamentary groups at the House of Representatives (lower house). Speaking at the opening of a plenary session dedicated to the examination and vote of a series of legislative texts, these deputies underlined the importance of the strategic partnership between Morocco and the EU. In this regard, the Justice and Development Group has underlined that Spain has tried and is trying to divert the crisis from its natural bilateral character that may arise in international relations and be resolved within the framework of bilateral dialogue, towards an attempt aimed at pushing the European Union and the European Parliament to attack Morocco. The Kingdom remains clear in its relations with these two institutions, the group said, noting that Morocco is attached to the respect of all the provisions of the conventions concluded with these two parties. This attempt should not mislead MEPs, as it will undermine a solid relationship intended to develop in a positive way and open up new perspectives, the group added. For its part, the Authenticity and Modernity Group stressed that Spain wanted to transform the bilateral dispute into a conflict with the EU, deeming this attitude as “illogical”, because Morocco maintains strategic relations with the European block which has granted the kingdom an advanced status, in addition to the important commercial and economic ties between the two parties. The group underlined the imperative to resolve this issue bilaterally between Morocco and Spain. As for the Constitutional Union Group, it noted that Spain wants to “Europeanize” its dispute with Morocco, while the Kingdom’s problem is mainly with the Spanish government which has committed acts against its southern neighbour and its partner in several issues, particularly migration. “Morocco plays a major role in the migration issue,” said the parliamentary group, noting that the Kingdom enjoys the status of a strategic partner with Europe, hence the need not to export this bilateral dispute with Spain about the migration crisis to the EU and the European Parliament. In its turn, the Istiqlali group of unity and egalitarianism stressed that the essence of the dispute with the Spanish government lies in the offense against Moroccans, noting that this crisis has no connection with the European Union or the European Parliament. The attempt to export this crisis will fail because Morocco enjoys an advanced status with the EU which considers the Kingdom as a model for democracy, stability and development in its regional environment, the group pointed out. The instrumentalization of the issue of minors is intended to be “a Spanish maneuver” which will not undermine Morocco’s determination to further strengthen cooperation with the EU and the EP and to clarify the nature of the political crisis which must be resolved within the bilateral framework between Morocco and Spain, it stressed. In the same regard, the Haraki group expressed its great astonishment and its deep disappointment over the inclusion of a draft resolution at the European Parliament on a so-called use of minors by the Moroccan authorities. “This is a maneuver intended to export a bilateral crisis between Morocco and the Spanish government,” it said. “Today, we affirm to the States and to the MEPs and to the wise people that our crisis is purely bilateral with Spain. We have a strategic partnership with the EU that we want to pursue, strengthen and consolidate,” it said. In its turn, the Socialist group explained that the current crisis with the Iberian neighbor was caused by the hostile and unacceptable behavior of Spain which hosted, under a fake identity, a war criminal, expressing its rejection of the attempt to instrumentalize the migration issue in order to involve the European Parliament and the European Union in a purely bilateral political crisis between Morocco and Spain. “The attempt to involve the EU in this crisis through the adoption of a resolution on the so-called use of minors by the Moroccan authorities requires a strong reaction because we believe in the solidity of relations with the Union and we are convinced that the voice of reason will prevail for more cooperation and partnership between Morocco and Europe,” the group pointed out. As for the Group of progress and socialism, it stressed that the inscription of the said draft resolution at the European Parliament agenda is an attempt led by the Spanish neighbor to export its political crisis with Morocco to the European Parliament, noting that the Kingdom has no problem with the EP or the EU, with whom it is bound by very distinguished relations and very advanced partnerships. In this regard, the group noted that Morocco enjoys the partner for democracy status within the Council of Europe, adding that the Kingdom has benefited from this status because it has made great advances in strengthening the democratic process in its economic, social, cultural and human rights dimensions. It also expressed its conviction that MEPs will know how to make the voice of wisdom and dialogue prevail, keep in mind the years of joint action on common and thorny issues and prospect the future for the strengthening of cooperation.