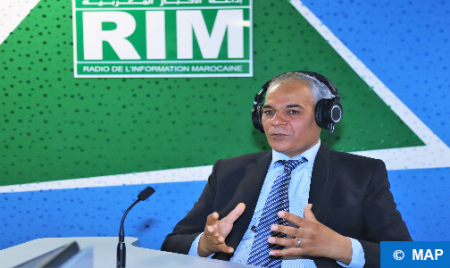 The combined Moroccan-US exercise “African Lion 2021” is the culmination of the security and strategic cooperation between Morocco and the United States, said Abdelfattah El Fathi, director of the Strategic Center on Sahara and Africa. This joint exercise reflects the long-standing Moroccan-US relations of partnership and cooperation in various fields, stressed El Fathi who was Wednesday the guest of the Moroccan Information Radio (RIM RADIO). This exercise also enshrines the recurring calls by Morocco for the Sahel and Sahara region to fight various forms of terrorist threats, he added. It also reflects the quality of equipment, military exercises, their nature and precision, as well as the volume of international participation in this exercise, he noted. Referring to the political and geopolitical context that marks this edition, especially after the U.S. recognition of Morocco’s sovereignty over its Sahara, the expert said that this joint exercise is organized for the first time in a geographical area that includes zones of the Moroccan Sahara near the security structure, thus refuting the allegations of the militias of the “polisario” on the fictitious bombing of these areas. The choice of this geographical space means that many countries participating in this exercise “have begun to assimilate the geographical and sovereign map of the Kingdom,” he said, believing that there is now an understanding of the reality of this map that respects the territorial integrity of the Kingdom. This choice confirms the sovereign decision of the United States, strategic allies of the Kingdom, to recognize the full sovereignty of Morocco over its Sahara, he added. El Fathi also highlighted to the “important” role of the Kingdom in the settlement of disputes in some African countries such as Libya and Mali, as well as its contribution to establishing the pillars of security, stability and common development in the entire African continent.