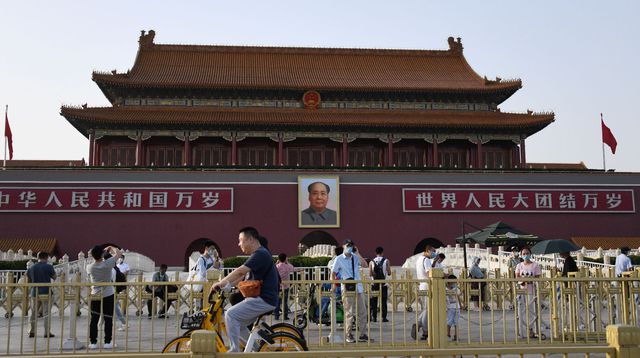 Director General of the Moroccan News Agency (MAP), Khalil Hachimi Idrissi held, Tuesday at the headquarters of the Agency in Rabat, talks with the Ambassador of the People’s Republic of China to Morocco, Li Changlin. On this occasion, the Chinese diplomat praised the excellent relations between the two countries, highlighting the positive changes made by the Kingdom in recent years. “Morocco has experienced very positive changes in all areas, especially in terms of infrastructure,” he said in a statement to M24, the continuous news TV channel of MAP, noting that “the Kingdom, which has preserved its stability, is in a very beautiful phase marked by progress and development”. Relations between Morocco and China have reached cruising speed thanks to the “historic” visit made in 2016 by HM King Mohammed VI in China, and marked by the signing by the two Heads of State of a bilateral strategic partnership, he added. “This strategic document of very high value has expanded the fields of cooperation and raised to a higher level our bilateral relations, in addition to the multiplication of contacts between the two countries,” he said, recalling the launch of the direct air link Casablanca-Beijing. Changlin expressed the willingness of his country to further strengthen this cooperation through the consolidation of the strategic partnership in its entirety, highlighting the major role of the media in this perspective. In addition, the Chinese ambassador stressed the importance of the general report on the New Model of Moroccan development, which he described as a “reference” for companies and for all Chinese operators. For his part, Hachimi Idrissi highlighted the remarkable presence of Chinese companies in Morocco, stressing the importance of establishing new innovative partnerships in various areas, including new technologies and renewable energy. MAP Director General welcomed the health gesture and the support given to Morocco by China, “a reliable partner” in the supply of the vaccine against Covid-19. He also expressed the willingness of MAP to accompany, as a media partner, efforts to consolidate cooperation and strategic partnership between the two countries. MAP and the New China News Agency (XINHUA) have been linked since 1984 by a cooperation agreement, which has been updated three times, in 2002, 2007 and 2017. Under this agreement, the two news agencies grant each other the right to exchange their news services in Arabic, French and English, their photos and videos by satellite or, if necessary, by Internet, in addition to the exchange of visits between the officials of the two agencies.