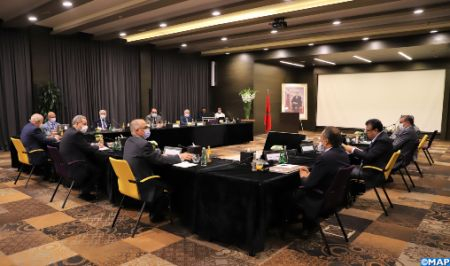 The elaboration of “the National Pact for Development” was at the heart of a meeting, held on Tuesday evening in Rabat, between the Ad-hoc Committee on the Development Model (CSMD) and political parties represented in the parliament. The meeting was attended by the Deputy Secretary-General of the Justice and Development Party (PJD), and secretaries-general of the Authenticity and Modernity Party (PAM), the Istiqlal Party (PI), the National Rally of Independents (RNI), the Popular Movement (MP), the Progress and Socialism Party (PPS), the Constitutional Union (UC), and the Socialist Union of Popular Forces Party (USFP). On the sidelines of this event, CSMD president Chakib Benmoussa pointed that, pursuant to the High Royal Instructions, the committee met with parties represented in parliament, as well as unions and economic stakeholders in order to present the committee’s report. This meeting is a response to the request by political parties to examine issues related to the new development model and its recommendations, Benmoussa told MAP. The secretaries-general noted that this meeting offers the possibility to interact with the said report, and study means to implement it in the parties’ programs, in order to trigger a “new political momentum” in the country. They said that it is necessary to give “new hope” to citizens, noting that the new development model has set priorities, choices and goals in the medium and long-term.