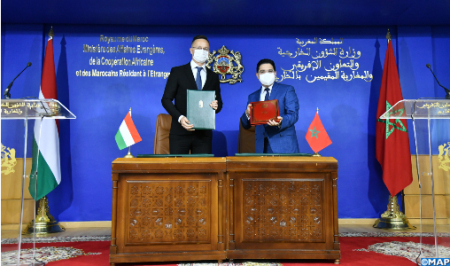 Morocco and Hungary on Wednesday signed several draft agreements in various areas of bilateral cooperation. These draft agreements were signed on the sidelines of talks between the Moroccan minister of Foreign Affairs, African Cooperation and Moroccans Abroad, Nasser Bourita, and the minister of Foreign Affairs and Trade of Hungary, Mr. Péter Szijjártó, who is on an official visit to the Kingdom. The two ministers signed a Memorandum of Understanding on political consultations which aims to establish a framework for the discussion of issues of common interest between the two parties through regular meetings between officials of different levels. The agreements signed include a Memorandum of Understanding in the field of diplomatic training which seeks to strengthen the partnership between the Moroccan Academy of Diplomatic Studies (AMED) and the Hungarian ministry of Foreign Affairs in the training of young diplomats and the exchange of experiences, as well as an agreement on mutual assistance in criminal matters for the creation of systematic mutual legal assistance between the two countries, in particular in the area of investigation and notification procedures in matters of criminal law and execution of sentences or protective measures. The two sides also inked a Partnership Agreement between the Customs and Indirect Tax Administration (ADII) of the Kingdom of Morocco and the National Tax and Customs Administration of Hungary. This agreement is intended to consolidate cooperation between the two institutions and improve the efficiency of their actions through the exchange of information and experiences. The agreements also include an Execution Program of the Cultural Cooperation Agreement for the years 2021-2024, which aims to implement and initiate actions in the sectors of culture and science for the implementation of the Cultural and Scientific Cooperation Agreement signed between the two countries on March 7, 1972. An Execution Program of the Sports Cooperation Agreement for the years 2021-2022-2023 has also been signed by the two officials. This program aims to implement and initiate actions in the field of sport for the implementation of the Cultural and Scientific Cooperation Agreement signed between the two countries on March 7, 1972. The two ministers also signed an Exchange of Note for the recognition of COVID-19 vaccination certificates with a view to reciprocally recognizing vaccination certificates of nationals of the two countries. A Memorandum of Understanding on scientific and technological research, which aims to strengthen cooperation in scientific and technological fields through joint research programs and the exchange of good practices in innovation, as well as an Additional Protocol on the amendment of the Memorandum of Understanding relating to “The Stipendium Hungarium” program for the years 2020-2022 and which aims to increase the number of scholarships granted to Moroccan students in Hungary from 150 initially provided for by the Program to 165 scholarships, were signed on the Moroccan side by the Minister Delegate in charge of Higher Education and Scientific Research, Driss Ouaouicha.