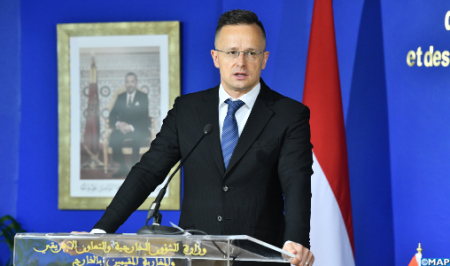 Hungary has welcomed the “decisive and exemplary” role of Morocco in the fight against irregular immigration and terrorism, reaffirming that the Kingdom remains a “strategic partner of the European Union”. “Hungary welcomes Morocco’s decisive and exemplary role in the fight against irregular immigration and terrorism, as a strategic partner of the European Union,” said the Joint Declaration signed Wednesday in Rabat by the Moroccan minister of Foreign Affairs, African Cooperation, and Moroccans Abroad Nasser Bourita and the Minister of Foreign Affairs and Trade of Hungary Péter Szijjártó, who is currently on an official visit to Morocco. Morocco and Hungary stressed the importance of developing cooperation, partnership, and dialogue between the EU and its southern neighbors and with the Euro-African area, to provide joint responses to all the challenges facing these regions, particularly in terms of security, stability, migration and development, the document added. Hungary commended Morocco’s action in the development of a new model of South-South cooperation. In this regard, both parties stressed the importance of promoting triangular cooperation between the Kingdom, Hungary, and their partners in the African continent.