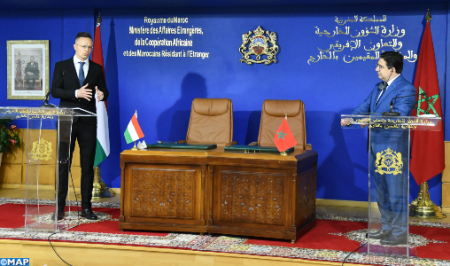 Hungary on Wednesday reaffirmed its support for the autonomy plan presented by Morocco and the efforts carried out under the exclusive auspices of the United Nations to achieve a realistic, pragmatic, lasting, political and compromise-based solution to the Sahara issue. In a joint declaration signed in Rabat by the Moroccan minister of Foreign Affairs, African Cooperation, and Moroccans Abroad, Nasser Bourita, and the Minister of Foreign Affairs and Trade of Hungary Péter Szijjártó, who is on an official visit to Morocco, Budapest reiterates its support for “the Autonomy Plan, presented to the Secretary-General of the United Nations on April 11, 2007” and to “the efforts of development undertaken by Morocco in the region.” Hungary also welcomes “the serious and credible efforts of Morocco, as a regional hub of stability and a privileged partner for development in Africa,” the document added. Morocco and Hungary underline their positive and constructive role in maintaining stability, security, and peace in their respective regions and stress their commitment to these principles as well as to a peaceful resolution of conflicts and respect for the territorial integrity and sovereignty of States, the Joint Declaration said.