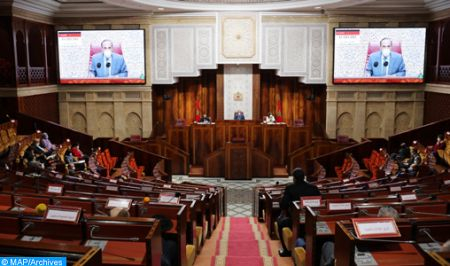 The Bureau of the House of Representatives and the Presidents of groups and the parliamentary grouping regretted that the European Parliament is being instrumentalized by some MEPs who flout the important partnership between Morocco and the European Union and that the instruments of partnership and the mechanisms of interaction between the European and Moroccan legislative institutions have not been brought together or activated. During an emergency meeting held, on Thursday evening, under the chairmanship of Habib El Malki, Speaker of the House of Representatives, the Bureau of the House and the presidents of groups and the parliamentary grouping welcomed the numerous MEPs, from different political groups and nationalities, who did not support this conflicting approach, said the lower house in a press release. They also thanked the Pan-Arab and Pan-African parliamentary bodies for their solidarity with Morocco and their rejection of the instrumentalization of the European Parliament in a bilateral crisis between Spain and Morocco, added the same source. “The House of Representatives rejects the many inappropriate provisions contained in the text of this resolution and denounces its ulterior motives,” the source said, adding that it is obvious that this is a maneuver to divert the attention of a political crisis between Morocco and Spain, a futile attempt to Europeanize a bilateral crisis whose genesis is known and whose responsibilities are well defined. “The Moroccan-Spanish crisis is linked to the attitude and actions of Spain on the issue of the Moroccan Sahara, a sacred cause for the Moroccan nation, for all its institutions and for its lifeblood”, said the same source. During this meeting, the members of the Bureau of the House and the Presidents of the groups and the parliamentary grouping also discussed the adoption by the European Parliament, on Thursday, of a non-legislative resolution on unaccompanied minors and the migration issue, noted the press release, adding that they denounced the content of this resolution containing many untruths. They underlined that Morocco’s accomplishments in the fight against illegal immigration is known and recognized and that the figures are there to prove it, the same source stressed. “Since 2017, migration cooperation has enabled the foiling of more than 14,000 illegal migration attempts, the dismantling of 5,000 trafficking networks and the prevention of countless storming attempts,” it said. In addition, on the issue of unaccompanied minors, Morocco was at the forefront of this issue with several member states of the European Union concerned by the matter, asking for its resolution since 2018, said the House of Representatives. HM King Mohammed VI reiterated, recently, his High Instructions on this topic to the Ministers of the Interior and of Foreign Affairs for the final settlement of this issue, knowing that the blockages are mainly due to the complexity of procedures at the level of the European countries concerned, underlined the press release. Regarding the reference in the resolution text to the city of Sebta, the Bureau of the House of Representatives and the presidents of the groups and the parliamentary grouping reiterated the legal status of this occupied Moroccan city. According to the press release, the European Parliament is going against the trend of unanimous recognition of Morocco’s status and its role in migration cooperation, adding that no UN agency (UNICEF, IOM, High Commissioner for Human Rights), or independent rapporteur, have commented on the issue of Moroccan minors or on any violation of the Kingdom’s international commitments. “On the contrary, the European Commission and the European External Action Service have amply welcomed the decisions taken by the Moroccan authorities to repatriate duly identified Moroccan minors. They also underlined Morocco’s key role in migration cooperation, it said. The Bureau of the House of Representatives and the Presidents of the groups and the parliamentary grouping, while denouncing the activism of certain MEPs, will continue to work with their European partners within the framework of mutual respect and the higher interests of Morocco.