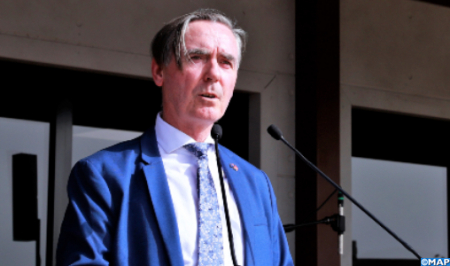 Australia seeks to begin a new era of fruitful cooperation with Morocco, Australian ambassador to the Kingdom, Michael Cutts, said Thursday in Rabat. With the construction of the new embassy headquarters, “we will enter a new era of cooperation between Morocco and Australia, full of dynamism and optimism,” said Mr. Cutts, who was speaking on the occasion of the installation of the Australian diplomatic mission in its new premises and the immediate start of its activities. “The design of this building reflects contemporary architectural creation, both Australian and Moroccan,” said the diplomat during a ceremony organized on this occasion in the presence of ambassadors from several countries accredited to Morocco as well as high-profile personalities from various backgrounds. Cutts also said that his country appreciates Morocco’s contribution to the efforts of the international community to combat the effects of climate change, terrorism and extremism. Referring to economic and trade relations, the Australian ambassador reaffirmed his country’s determination to work together with Morocco within the World Trade Organization to promote better access of products to various international markets, and to ensure the success of the twelfth ministerial meeting of the Organization scheduled for the end of the year. For his part, the president of the communal council of Rabat, Mohamed Sadiki welcomed the excellent relations between Morocco and Australia which celebrate the 45th anniversary of the establishment of their diplomatic relations, adding that Morocco never hesitated, even under the protectorate, to defend the noble values of democracy and freedoms. For her part, the Ambassador of Canada in Rabat, Nell Stewart commended the quality of cooperation between the Canadian and Australian diplomatic representations, which cover several areas, as evidenced by the presence on the same premises of the two embassies.