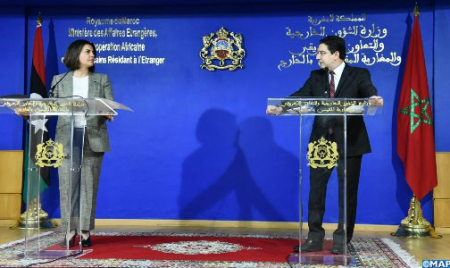 The High Instructions of HM King Mohammed VI on the situation in Libya consist in that Morocco always stands by this country and supports all the choices of its institutions, said, Friday in Rabat, minister of Foreign Affairs, African Cooperation and Moroccans Abroad, Nasser Bourita. Speaking at a joint press conference with his Libyan counterpart, Najla Mangoush, following bilateral talks, Bourita underlined that “Morocco has no agenda, no solutions, no vision on the Libyan crisis”, and that the Kingdom “provides unconditional and unlimited support to whatever is likely to serve the interests of Libya and the Libyans”. “Morocco has only one conviction. That of seeing this situation, which neither the Libyan people nor its institutions deserve, end”, he said, noting that the Kingdom is “fully convinced that the Libyans, who are animated by wisdom, will manage to get their country out of this situation”. “Even if Libya is going through a delicate stage, Morocco remains optimistic that the country will progress on the right track”, adding that Libya “is today in a better context, offering the conditions to get the country out of this situation which has lasted too long and enable the Libyans to live within the framework of unified institutions”. He said that the visit of his Libyan counterpart, which is her first official visit to the Kingdom, “is in line with the continuous communication between the Kingdom and the Libyan institutions, in accordance with the High Royal Guidelines consisting of accompanying the political process of the country, with a view to achieving stability and development”. The talks focused on “the evolution of the political process in Libya, the preparations for the next deadlines and the role that Morocco can play in this framework, in consultation with the Libyan brothers”, he pointed out. The talks were an opportunity to “discuss strong bilateral relations, at the cultural and human levels as well as the means to activate some of their aspects as soon as possible”, said Bourita, noting that it was agreed to hold, soon, a meeting of the joint consular commission, with a view to settling numerous consular issues of Moroccans in Libya and Libyans in the Kingdom. He added that it was also agreed to hold the second edition of the Moroccan-Libyan economic forum, as part of the activation of trade and economic relations between the two countries. The development of bilateral relations in the religious and security areas were also examined in order to address the challenges facing Rabat and Tripoli, Bourita concluded.