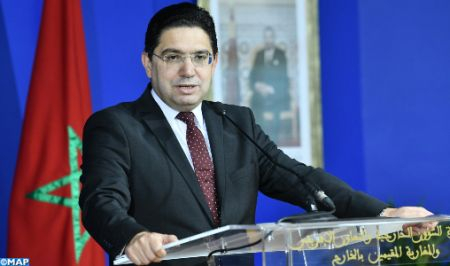 Morocco considers that any desire to divert the debate on the crisis with Spain is “counterproductive”, said Friday in Rabat, minister of Foreign Affairs, African Cooperation and Moroccans Abroad, Nasser Bourita. “Morocco, which considers that the crisis is bilateral and political with Spain, is satisfied with its relations with the EU in all areas,” said Bourita at a joint press conference with his Libyan counterpart, Najla Mangoush. For Morocco, the resolution of the European Parliament is out of step with the record of Morocco in the fight against illegal migration, he said, affirming that the efforts of Morocco in this area are known and recognized. “We have seen even yesterday many institutions that have raised this role, including European institutions such as the commission and the foreign service,” he said. “This resolution is part of an instrumentalization of the European institutions and the European Parliament in particular in relation to an issue that is not the responsibility of the EP,” he added. “If the title of the resolution is about the UN Convention on the Rights of the Child. The first question is: Who gave the European Parliament the mandate to supervise UN conventions? Since when, the European Parliament is the guardian of the application by member states of a UN convention?, Bourita wondered. The conventions have their mechanisms, the minister stressed, praising the UNICEF which values and welcomes the role of Morocco in the implementation of this convention. The minister also referred to the observations of the Committee on the Rights of the Child following the review of Spain’s periodic report in January-February 2018. In this context, he recalled, the committee expressed serious concern about the discrimination that children continue to suffer de facto in Spain because of their disability, origin or socio-economic situation, and expressed concern about the poor hosting and accommodation conditions in the overcrowded temporary holding centers for foreigners and the neglect that occurs there, as well as about the lack of complaint mechanisms accessible to children. The committee is also deeply concerned about the Spanish legislation that allows intrusive methods even when identity documents appear to be genuine, as well as the high level of violence in childcare centers and the inadequate care and protection provided by professionals, he said. The record of Morocco in relation to the application of the convention is known and there are other situations that could have interested the European Parliament. “Morocco will not be diverted from the essential: A bilateral crisis whose genesis is known and which is related to an attitude and actions that have been hostile to a cause sacred to Morocco and Moroccans,” he stressed. This is the root of the problem and until it is resolved, the crisis will remain and any attempt to divert the debate would be futile and will have no impact on the perception of Morocco in relation to this crisis, concluded the minister.