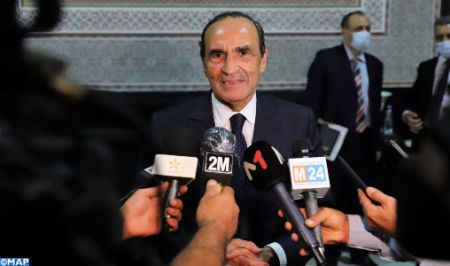 An objective and realistic reading of the results of the vote of the European Parliament (EP) resolution adopted Thursday on Morocco, at the initiative of some groups within the EP, shows that Spain has failed in its attempt to exploit the issue of unaccompanied minors, said speaker of the House of Representatives, Habib El Malki. In a statement to the press Thursday after an emergency meeting of the Bureau of the House of Representatives with the presidents of the groups and the parliamentary grouping, El Malki stressed that the results of the vote of this resolution confirm that “Spain has failed in its attempt to exploit the issue of unaccompanied minors, after its premeditated provocation by hosting on its soil the so-called Brahim Ghali”. For the speaker of the House of Representatives, these attempts “are part of a plan to preserve the colonial legacy,” stressing that “Ceuta is a Moroccan city”. He said that these results demonstrate once again the correctness of the position and the wisdom of Moroccan diplomacy, an achievement at the official and parliamentary levels. After highlighting the initiatives undertaken in this framework, El Malki praised the work of European groups and parliamentarians, who have helped to put Morocco out of suspicion, recalling, in this regard, that HM King Mohammed VI had reiterated His High Instructions for the final settlement of the issue of unaccompanied Moroccan minors who are in an illegal situation in some European countries. The speaker of the House of Representatives also expressed the hope that “Spain becomes a strategic partner as it was before,” noting that this country must, to this end, “show wisdom as Morocco has done since the beginning of this crisis” and resume dialogue with the Kingdom to resolve all issues relating to a set of problems, based on respect for the constant values of States and peoples including the territorial integrity. El Malki recalled that Morocco was among the few countries that adopted, in the midst of the Catalonia crisis, a “courageous position” in favor of the territorial integrity of Spain.